In 1902 the department store Wertheim in Berlin started to showcase state-of-the-art living spaces designed by contemporary architects and artists. A set up of two typical Berlin flats was built into one of the sales areas, allowing the visitors to walk through real-life rooms. Among the contributing architects were British architect Mackay Hugh Baillie Scott, one of the main actors of the secondgeneration Arts and Crafts Movement, as well as Peter Behrens, co-founder of the Deutsche Werkbund and later creative director of AEG. Influenced by the young Jugendstil movement that originated in Darmstadt and influenced the entire nation, they wanted to spark a revolutionary change to establish art and nature in modern everyday life. The exhibition was to show the new upcoming style that Germany had long been searching for.

Peter Behrens’ dining room was set-up with a centrally positioned seating arrangement of a dining table and four chairs. The walls tie the room together, with a recurring geometrical motive in the frieze decoration. The same ornament-like language was applied to the carpet; a result of Behrens’ abstract development of ornaments of intertwined rectangles, in his well-known geometrical graphic language. 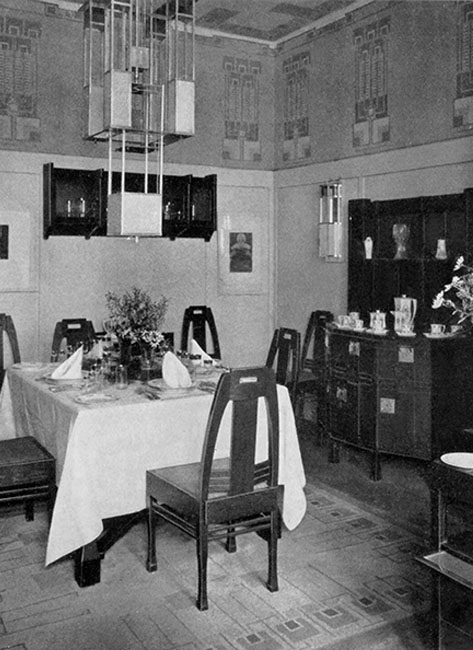