Model interiors and model homes were a recurring element at the world fairs of the previous century. At Expo 58, the Brussels World Fair of 1958, these forms of presentation were also a common feature. Various participating nations saw the model interior or the model home as a powerful didactic instrument with which to draw attention to the idea of successful post-war reconstruction, a new national identity or a promising future. Model homes offered an accessible formula, instantly recognizable across national borders and extremely suited to the synthesis of industry and culture. At the same time the model home was a rewarding formula for participants with a more commercial purpose. Within the Belgian Section, especially, contributions such as the pavilion of the Buildings and Dwellings group or that of the furniture company Vanderborght provided an overview of what the Belgian market had to offer – or might be offering in the future. As well as giving expression to progress, these model homes and interiors often appeared to be referring explicitly to the overall theme of the world fair: ‘A balance sheet for a more humane world.’ A good or comfortably furnished home was a basic need, the social importance of which had been brought into sharp focus since the horrors of the Second World War.

The model homes and interiors at Expo 58 were extremely wideranging, not least because of the diversity of the participating nations and businesses and their different visions of ‘modern’ or ‘better’ living. Besides, by the end of the 1950s the model interior was familiar to the general public, which had become acquainted with the national promotion of ‘new’ and ‘good’ living during the post-war years. Expo 58 gave designers the opportunity to deploy this tried and tested exhibition formula in a range of different, often subtle and innovative ways, stretching from realistic, full-scale models to fictitious or evocative settings in which furniture and other furnishings played a significant role. This article sheds light on the rich palette of model homes and interiors at Expo 58, and reflects on examples that pushed the medium’s boundaries. 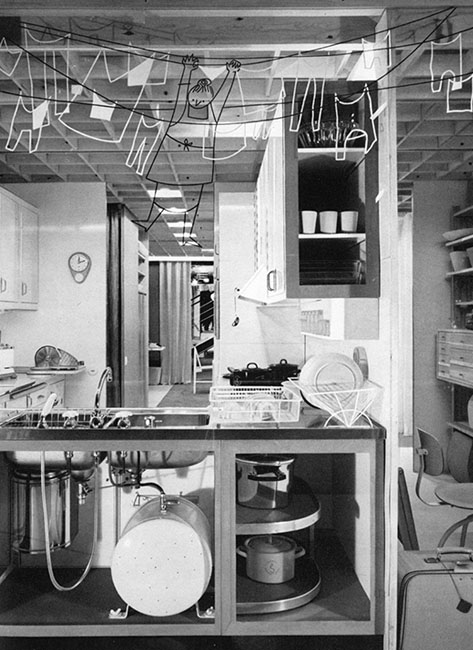