In 1964, the new University of Twente campus (at that time still the Institute of Technology) was opened. It is the only university in the Netherlands that offers on-campus housing for students, in this case on its wooded terrain. After supervisor Willem van Tijen built the first series of student accommodations himself, he asked Herman Haan to design the second progression. Although Haan had not designed residences in serial production before, he was involved with Team 10 and – despite being older – felt an affinity with younger structuralists such as Joop van Stigt and Piet Blom, who had also been given assignments on the campus.

Haan’s first student housing complex consists of 17 linked square units, each composed of residential cells and communal facilities grouped in an L-shape on two sides of a small patio. A centrally located larger patio functions as a semi-public square. At several places, single-occupancy units on two floors were realized. The patios situated in the middle of the complex cannot be reached from the outside, but are accessed from small entrances that are linked by means of a partly covered pedestrian/cycling street over the roof of the complex. These entrance structures are connected to double ‘warden’ rooms on the roof. Each patio unit includes two clusters of three rooms with a shared shower and toilet, a double-occupancy unit and a communal breakfast room. 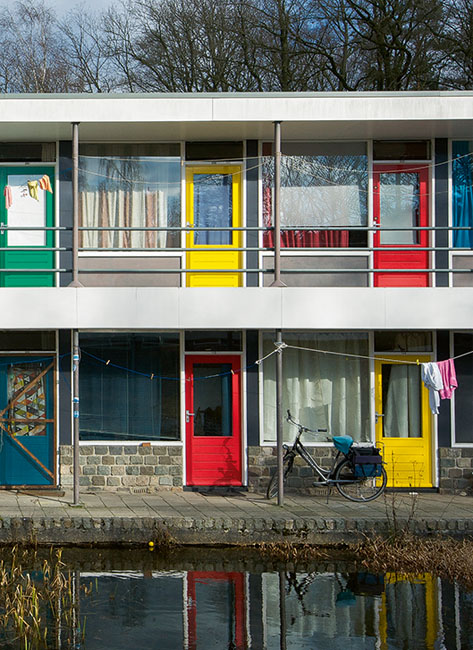