St John’s College is one of the largest colleges in Cambridge. Founded in 1511 by the mother of Henry VII, the original layout was extended further and further over the course of five centuries until it ultimately became a complex entity of buildings and courts. The compound as a whole provides illustrative insight into the development of the colleges in Cambridge.

The first court was built in the first quarter of the sixteenth century, and follows the college model developed in the previous centuries. The colleges, which were generally founded by high-ranking clergy or members of aristocratic families, initially provided accommodation for teachers attached to the university, and later for the students as well. They were collective residential buildings with private living quarters and communal spaces such as a hall with kitchens and servants’ quarters, a chapel and a library. The type displayed considerable affinity with the layout of monasteries and unfortified manors, which had also been developed in the Middle Ages.

In the first 150 years of its existence, St John’s was extended twice with a new court, each time added behind the one already present. As a result, the college stretched out from a main route that ran parallel to the River Cam down to the Cam itself. In spite of the different periods in which the three courts were built, they display significant similarities of style and materials (the brickwork characteristic of Cambridge). 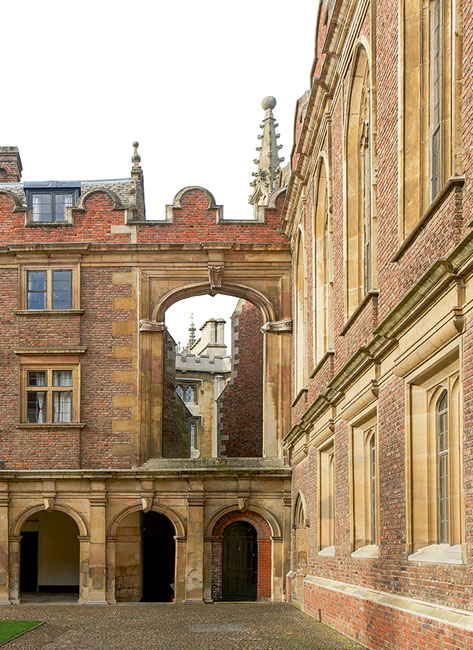