Malmö, with its 270,000 inhabitants, is the third-largest city in Sweden. Since 2000, Malmö has been connected to Copenhagen by the Öresund Bridge, yet it has continued to struggle with its image as a dilapidated port city. To shed this image, the city developed a plan (together with the Swedish state and a range of other partners) to transform Malmö into an exemplary sustainable city, in accordance with the LIP (Local Investment Programme, 1998-2003). A flywheel in this process was the housing exhibition known as ‘Bo01 Framtidsstaden’ (City of Tomorrow), which was held in the Västra Hamnen (Western Harbour) section of Malmö. On the basis of a quality programme, this exhibition offered guidelines in terms of a varied architectural appearance and quality, the use of ecological materials, energy that is 100 percent recoverable, green public spaces and technical infrastructure. Bo01 is indebted to the twentieth century housing tradition in Sweden, where the majority of the population lives in (small) apartments in the cities, with a high degree of density. The 1940s notion of the ‘neighbourhood unit’, which symbolized the Swedish welfare state, consisted of houses and a downtown centre with all imaginable amenities. This model was used as the inspiration for Bo01. 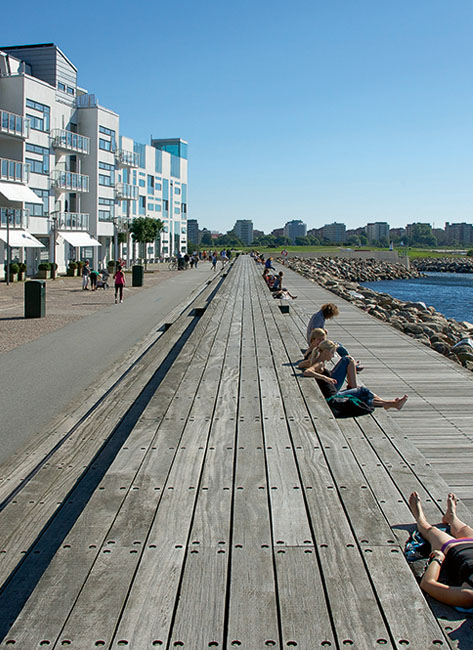