In 1931, amid the economic crisis, the Deutsche Bauausstellung opened in Berlin. It was the result of an initiative started several years beforehand to open a permanent building exhibition in Berlin. Part of this exhibition was to consist of several separate, temporary exhibitions, such as the ‘Internationale Ausstellung für Städtebau und Wohnungswesen’ and the exhibition ‘Die Wohnung unserer Zeit’. This latter exhibition covered an entire exhibition hall, and was set up under the leadership of Mies van der Rohe. It seemed that Mies here was picking up the thread from Stuttgart’s Weissenhof Siedlung in 1927, which he had also organized. But this new exhibition would be taking place indoors, in a hall where 1:1 models were built based on the designs of the participants, who were now limited to architects living and working in Germany. Mies introduced the exhibitions with the statement: ‘The home for our age has not yet been created. But changes in living conditions will ensure that this new home will indeed be created.’

One of the main themes was the issue that Gropius had addressed, namely high-rise versus low-rise buildings. Yet by being set in a large hall, where apartments could only be displayed as a fragment of a larger whole, it was difficult to make a direct comparison between the two forms of housing; instead, attention was now focused on the layout and the design of the homes. The entries seemed to fall into two categories. Most striking were the shiny interiors for villas and apartments featuring tube-based furniture by architects such as Mies van der Rohe, Breuer, Hilbersheimer and Gropius, all of whom were affiliated with Dessau’s Bauhaus. The other category of entries took a more functionalist approach to the issue of small (and often ground-floor) homes by architects including Häring and Schuster. As a possible answer to Mies’s call for housing that resonated with changing living patterns, a number of designers created apartments for a ‘Boarding Haus’, with collective spaces on the ground floor. 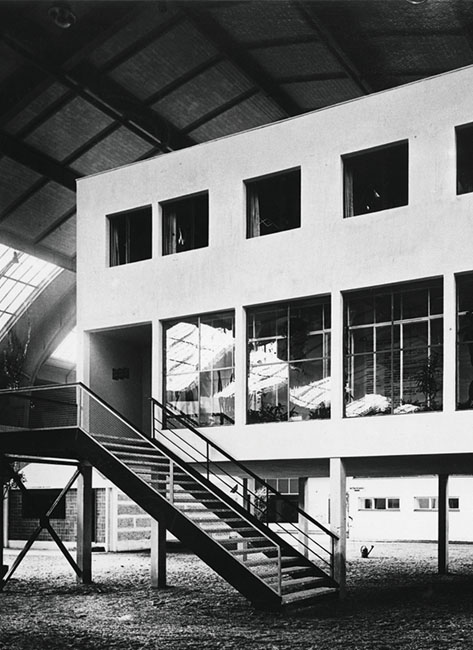