For the Individual and the Collective

Drive north from Eindhoven’s central station along Montgomerylaan, one of the city’s arterial roads, and after exactly 3 km you will arrive at a shopping centre, named after the district of Woensel. Beyond it lies ’t Hool, a remarkable and exceptionally green residential area designed by the Van den Broek en Bakema office, completed in 1972 so now more than 40 years old. The first thing to catch the eye is the sheer quantity and quality of public green space: large trees, shrubs and plenty of other plants create the impression of an overgrown low-rise enclave. Only on closer inspection does it become apparent just how big the neighbourhood is. Both the low-rises within the landscaping and the high-rises a bit further north are part of the plan. Together they form a coherent architectural and spatial entity.

The neighbourhood boasts a surprisingly wide spectrum of dwellings, including courtyard houses, terraced housing, detached houses and split-level high-rise apartments; a total of 14 types, from subsidized rental to free-market owner-occupied housing. All are built in plain brick and dark painted wood. The neighbourhood’s layout is more or less symmetrical. A green, north-south axis bisects the plan and links the area with the Dinantpark to the north and the shopping centre to the south. Situated on either side of this central green axis are six residential courts. Nine smaller versions of this configuration can be found along the neighbourhood’s eastern and western borders. There are two entrances for motorized traffic: in the north-western and north-eastern corners. The road connecting these two entrances forms a loop providing access to the residential courts. 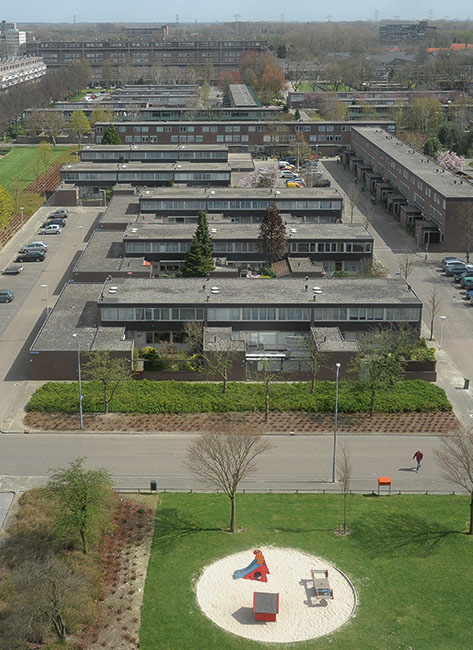