In 2000 the City of Amsterdam held a competition for a collective residential building on the south-western point of Steigereiland. Steigereiland is part of the expansion district of IJburg that consists of a series of artificially constructed islands in the IJmeer. The city council had cleared the way for the experiment on Steigereiland, including the provision of many plots for both private individuals and collective commissions. The Vrijburcht foundation was set up especially for the competition and consisted of a group of friends, among whom architect Hein de Haan of CASA architecten. The foundation’s plan was selected for the location. Residential building BO1 in the East Harbour Area of Amsterdam developed earlier by CASA served as an example of their work. Housing association De Key played an important role by standing surety in the development phase and providing continued management of a number of the project’s components.

The development consists of a closed building block surrounding a communal green inner courtyard. All the houses can be accessed from this internal terrain. The broad gallery on the first floor follows the example of the famous Justus van Effen block by architect Brinkman in Rotterdam with its elevated street or deck that forms the second communal external space in addition to the inner court at ground level. The houses on the third and fourth storeys can be reached via stairs from the deck. The deep volume on the waterfront is composed of three apartments on top of each other, which are accessed by means of staircases in light courts in the middle of the volume. These courts are reached from the inner garden via narrow straddling passageways. Hein de Haan designed a basic structure for the houses, which allowed plenty of opportunities for further personal elaboration. There are also a number of care houses in the block. Parking is available in an underground communal parking area. 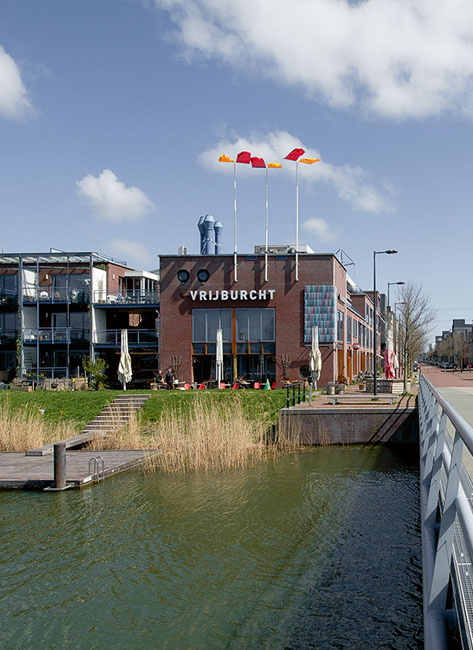