Architect/engineer Ricardo Aroca from Madrid realized a number of unusual apartment buildings in the 1970s. The underlying principle was the idea of a vertical shelving rack on which made-to-measure houses could be placed, independently of each other. Each storey provides a free floor slab where every layout is possible. To achieve this, Aroca developed a section in which a concrete table construction spanned an open ground level. On the table, there is a steel frame with four to five floor slabs above each other.

The building, referred to as Arturo Soria, together with the nearby project on the Calle de Angel Munoz, can be seen as a radical, uncompromising elaboration of Aroca’s basic principles. In so doing, it forms one of the most attractive examples of the principle of support and infill in housing, as John Habraken formulated in the early 1960s. Arturo Soria consists of three building volumes in which houses and offices are mixed. The middle building makes a bend to preserve a number of large pine trees. The head of this building contains several open plan office spaces; the tail – beautifully situated between the pines – contains apartments that can be reached via two staircases. The project was designed and built for a collective of clients. The houses, which differ significantly in size and layout, were designed on the basis of the requirements of the clients. 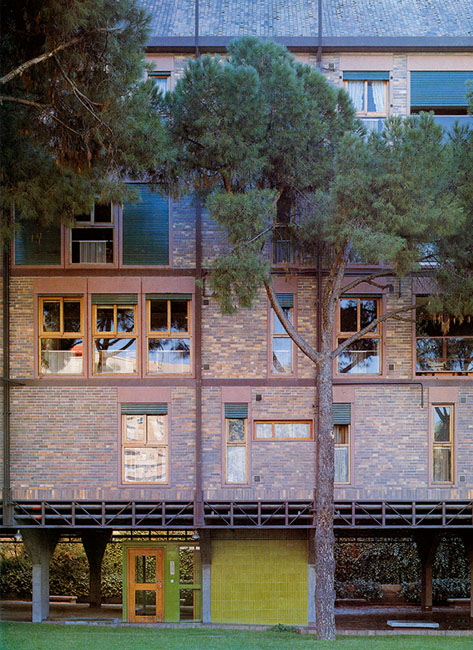