In the 1940s, David and Priscilla Henken, two young professionals who lived and worked in Manhattan, took the initiative to found a cooperative community in the countryside together with like-minded people, away from busy and densely populated New York City. Their inspiration stemmed from the ideas of Ralph Waldo Emerson and Henry David Thoreau, the author of Walden, Or Life in the Woods, about the power of the individual and the simple life outdoors. A retrospective of the work of Frank Lloyd Wright in the MOMA brought them into contact with his vision and designs for an ideal development model for suburban America – Broadacre City – and his designs for affordable housing: the Usonian Home. In 1944 they formed a cooperative under the name of ‘Usonia’, and the members saved money on a monthly basis to build their own homes outside the city. In 1947 the cooperative acquired a wooded tract of land in Pleasantville in Westchester Country, about 50 km north of New York.

Naturally, Frank Lloyd Wright was asked to design a plan for them. He based his proposal on earlier designs for cooperative housing: Usonia 1 in Lansing, Michigan and two projects near Kalamazoo, also in Michigan. The proposed plan for Usonia Pleasantville followed the pattern of the last two projects. Circular plots fill the available terrain, and the spaces left over between the circles ensure that the houses are separated from each other. Each circle was precisely 1 acre in size (4,047 m2), with room for a single house, which would be based on the by now extremely rich repertoire of Usonian homes. The circles were clustered in groups of five, leaving a sixth circle unbuilt, thereby creating large intermediate spaces and an intact green landscape. There was space here for communal activities such as the inevitable barbecue. In between the circles, meandering roads were made that strengthened the idyllic picture of apparently unspoiled scenery. The cooperative had to overcome a great deal of resistance, in particular with regard to the necessary financing. For instance, at the request of the bank, the plots were later adjusted and extended with parts of the ‘left-over’ spaces. The residents also introduced several communal facilities: play areas, a children’s farm, vegetable gardens, a swimming pool and a community building. 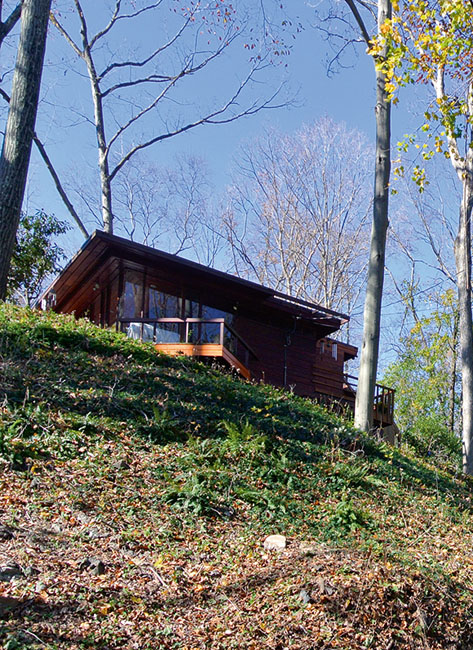