The aim of the Dutch Housing Act of 1902 was to relieve the worst failings in the public housing situation, particularly among the poorest section of the population. This did not mean, however, that improvements were not desired for those who were better situated. For this reason the ‘Amsterdamsche Coöperatieve Woonvereeniging “Samenwerking”’ (‘collaboration’) was founded in 1908. The initiators of this housing corporation were a small group of higher-level civil servants of the City of Amsterdam who intended to build their own homes.

The first two projects realized by ‘Samenwerking’ (in 1910 and 1913, both designed by architect M.J.E. Lippits) were of modest proportions. The ‘third construction’, completed between 1919 and 1922 and designed by architects Lippits and J.C. van Epen, was much larger. It numbered about 800 dwellings housed in six city blocks. The buildings around the Harmoniehof, by Van Epen, form the heart of this third project.

Van Epen’s project consists of two city blocks and eight semi-detached houses arranged around a public garden. The housing blocks, oriented east-west, are long and narrow: 180 by 40 m. The inner space, used as private gardens for the ground-floor apartments, is a mere 12 m wide. As compensation there is an elongated green strip between the two building blocks, closed off at both ends by four substantial townhouses, each consisting of two semi-detached houses. This is the actual Harmoniehof, enclosed by a low steel fence: a public garden with grass, green borders and a central water feature, with four sizable trees at the corners. Outside the fence two wooden benches, with their backs to the street and the houses, look out onto this garden. 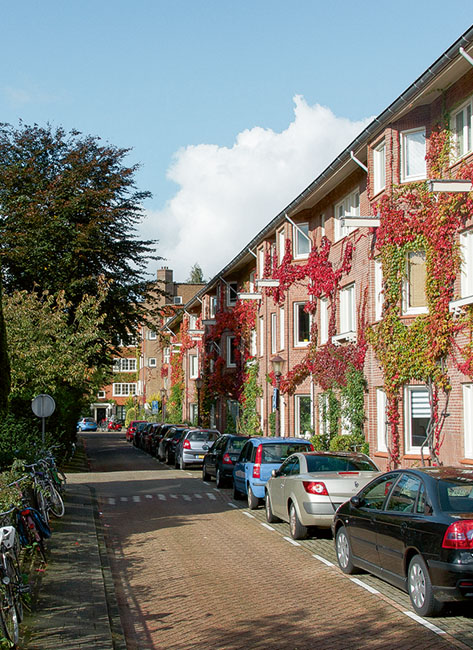