In the early 1990s Mecanoo architects created a residential neighbourhood in the Prinsenland expansion zone to the east of Rotterdam. By this time Mecanoo had rapidly evolved into the most significant representative of ‘neomodernism’. This architectural reorientation towards the formal and typological models from the heyday of modern architecture in the interwar years offered an escape from a situation in which architecture appeared to have become a forgotten concept in house building: attention had focused initially on the production process (1960s) and subsequently on the social process (1970s and 1980s).

In the Ringvaartplasbuurt-Oost development Mecanoo’s designers skilfully combined a number of models from the past. They based the building layout on the strict Zeilenbau (rows of housing oriented towards the same direction) of the Westhausen estate in Frankfurt (Ernst May, 1929-1931), which they adapted by ‘shaking up’ the blocks to break the ranks, introduction small shifts and changes of angle to create a more varied whole. They also added several curving or fanned blocks on the east side of the project. This picturesque modification appears to reference earlier English and German garden developments from the period between 1900 and 1920.

The western section of the neighbourhood comprises four clusters of ground-bound dwellings in short 2 x 4 rows. These clusters are separated by streets for motor vehicles with parking spaces. Within each cluster are parallel, vehicle-free, green strips with varying layouts. Similarly vehicle-free residential paths, rotated and offset along each other’s axes, form long, continuous pedestrian connections in an east-west direction. Each cluster is closed on its north side by a single building with ground-floor maisonettes topped by a layer of gallery apartments. In the more freely designed eastern section there is a larger, collective, green, transitional area, with the largest and highest residential building in the project, known as ‘the Ship’, to the north. 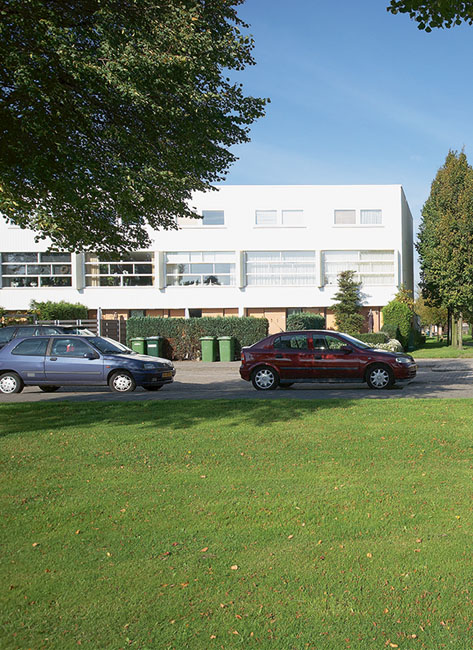