During the post-war years French architect François Spoerry fiercely rejected modernism in general and the work of Corbusier in particular. He confronted the ‘myth’ of modernism, which he believed produced unliveable cities lacking consent and social cohesion, and produced an alternative architecture douce, based on traditional building forms and residential communities, where concepts such as collective memory and the human dimension played an essential role.

In the early 1960s Spoerry bought a 25-ha piece of marshland in the bay of Saint-Tropez where he intended to combine his fascination for traditional architecture around the Mediterranean with his passion for sailing. He designed the Cité lacustre, or waterside city, of Port Grimaud, a marina with recreational dwellings, as a small Venetian town on a lagoon with a series of Provençal houses, each with its own berth for a yacht. Spoerry acted both as the project designer and developer. Port Grimaud suffered a laborious start, as it proved virtually impossible to find investors. Spoerry eventually managed to complete an initial phase, in the hope that this would interest buyers for subsequent phases. His tactic worked, the project began to appeal to potential investors and was ultimately completed in phases.

Port Grimaud was designed as a chain of islands and peninsulas, with water penetrating far into the development, so that virtually every house is situated directly on the water and has a berth for a boat. The long rows of dwellings are grouped in clusters on the little islands and spits of land, enclosing streets and squares in which there is only limited space for cars. Parking facilities are mainly located around the edges of the project. 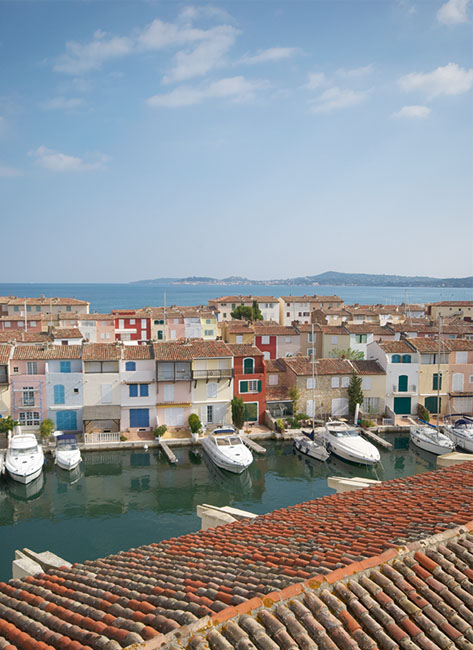