On a perfectly ordinary street in Floirac, a suburb of Bordeaux, French architect couple Anne Lacaton & Jean-Philippe Vassal built a house in 1993 that stands out for its minimalism. Not the kind of minimalism that made Swiss architecture world famous, but a minimalism that Rem Koolhaas once described as ‘Calcutta minimalism’ and that has to do with a minimum and clever employment of means.

The Latapie House was the first design that Lacaton & Vassal made after having lived and worked in Africa for five years. Although homes in Northwestern Europe can hardly be compared with homes in Africa, the design of this house was clearly influenced by their experiences there. Whereas in the European tradition there is a strong emphasis on form and function, in Africa this is often lacking, and a more instrumental conception of architecture prevails. Seen from this outlook, a house is not only a minimal protection against the elements, but especially a tool with which to realize a more pleasant – read liveable – climate. In other words, performance instead of form.

The Latapie family had a budget for a house of around 80 m². Lacaton & Vassal interpreted their request to design a house with a minimum of means as a challenge to make a house that would be at least twice as big. Their search for an economically attractive construction led the duo to a building method that is normally only used for industrial sheds: a simple steel framework clad with sheets of corrugated material. By designing a house as an ‘oversized coat’ and only climatizing the core – Lacaton & Vassal speak of a winter and a summer house – the economic limitations of this house are clearly compensated by its spatial and energetic aspects. A more or less conventional living scheme is coupled with an enormous conservatory which, depending on the weather, serves as an extra living room, a giant sunroom or passive source of heat.

The residence consists of a block-shaped volume with a mono-pitched roof. On the street side, the skin of this volume is sheets of corrugated fibre cement; the back side of the house is totally covered with transparent sheets of corrugated PVC. A wooden winter house, comprising approximately half of the total volume, is pushed against the inside of the closed façade. On the ground floor of the winter house, the kitchen and the living room are situated around a central core; on the upper floor, the bedrooms are organized in a similar layout. The conservatory, alias the summer house, is two storeys high. Large doors and windows afford contact with the winter house. The summer house does not have a fixed layout and can be furnished and used as desired. 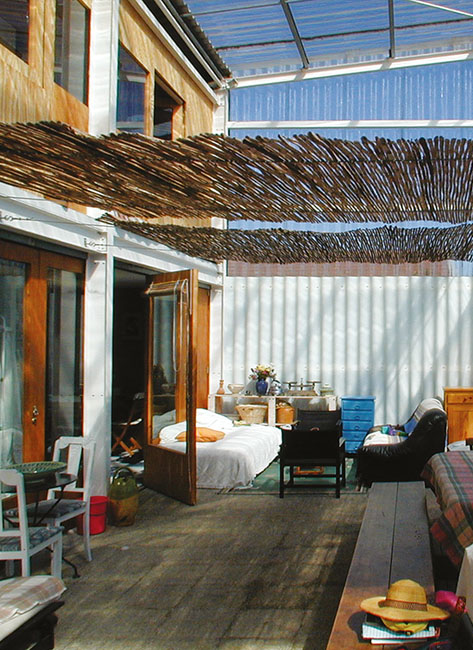