From the mid 1990s the Breda local authority sought a function for the Chassé site, a disused complex of barracks between the southeast edge of the city centre and the Singel. Several proposed designs were deemed unsatisfactory, before OMA won the competition for the overall plan. The basis for this plan was not a traditional city model of streets and (closed) building blocks, but a ‘campus model’, or field (Latin campus) with ‘pavilions’. OMA considered this strategy to offer the best opportunities for a phased approach to a possibly uncertain development. It also accorded a selfevident place within the new context to existing buildings on the site, such as Herman Hertzberger’s Chassétheater, completed in 1995.

Although the plan appears to be a random configuration of building forms and types, appearances are deceiving. A number of sightlines, such as the line between the water tower and the Grote Kerk, determine the position and form of several volumes. The open space between the buildings was also carefully designed by the West 8 design agency. The park-style environment is complemented by two squares, which add to the inner city’s open spaces. One of these, a quadrangle, is situated before the Chassémuseum (formerly the main building in the barracks complex, remodelled and refurbished by Pascal Grosfeld). The other forms the roof of the underground public car park. The hard surface, comprised of a number of triangular sections, runs through the heart of the Chassé Park, connecting Oude Veste with the Singel. 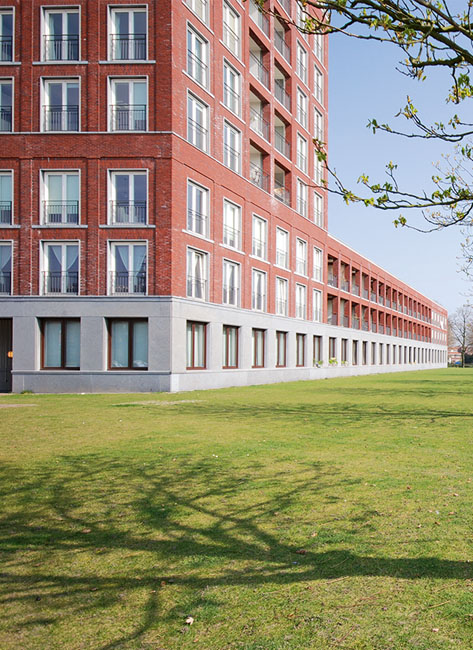