At the northern point of Sloterplas, a lake in Amsterdam, lies Noorderhof, a project built to a design by Krier Kohl Architekten. Noorderhof is situated in a zone originally intended for schools, surrounded by the open parcellation so characteristic of the suburb known as the Westelijke Tuinsteden and Cornelis van Eesteren’s Algemeen Uitbreidingsplan (AUP, General Expansion Plan). The project comprises four closed building blocks, grouped around the OLV van Lourdes Church by Marinus Granpré Molière (1955-1957), and two smaller blocks to the south of the church, where an existing semi-circular residential building now forms the southern limit of the neighbourhood.

The church building forms the pivot for Noorderhof’s spatial layout. To the front is an asymmetrical, funnel-shaped open space. The buildings around this square are two storeys high, with three-layer accents at their corners. The façades are uniform in execution, unlike in the rest of the plan, with two-storey-high window sections between brick piers, creating a rhythmic repetition that resembles a colonnade from a distance. Some of the dwellings around the square have small front gardens. The square’s funnel shape produces two slanting, irregularly formed building blocks. The largest has a public inner area, the other (like the rest of the building blocks) an inner space not open to the public. A continuous, public zone is formed around the various blocks by the system of streets, the church square, a public garden and a small park. 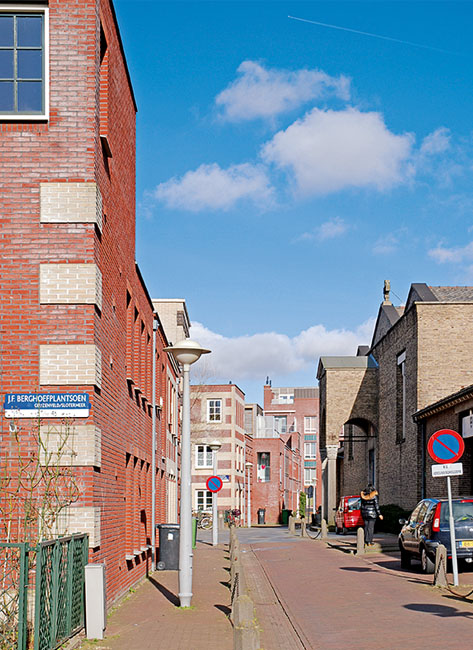