In 1996 Frits van Dongen was asked to design an apartment building in a spectacular location in the Plantagebuurt area of Amsterdam. But development of the almost rectangular site at the junction of Nieuwe Herengracht and Entrepotdok proved to be no easy task. Given the limited dimensions (33 x 55 m) only two options were possible. A development based on wide, shallow houses, type B as they are known in Van Dongen’s jargon, or development based on narrow, deep houses. The first would result in a patio block, the second in a solid block. Neither option was satisfactory in the eyes of the client, who wanted a housing block with grandeur. Van Dongen managed to break the deadlock by combining the two principles. ‘The inclusion of three deep dwellings in the block with shallow apartments creates problems but also introduces some nice touches to an otherwise monotonous block,’ Van Dongen says in the interview elsewhere in this publication.

The three Long Houses (Van Dongen refers to them as type LH) are staggered on top of one another, so that their floors form the ceiling of an imposing entrance hall. At the top they form a patio-style space. Although the LH dwellings are exceptionally deep, the arrangement of the floor plan bears a resemblance to the core houses that Van Dongen built for his first housing project. But the unusual position within this project made it possible to punctuate the house’s elongated shape with the addition of a large roof terrace. The other 40 flats in the block are variations on Van Dongen’s type B and a maisonette type. 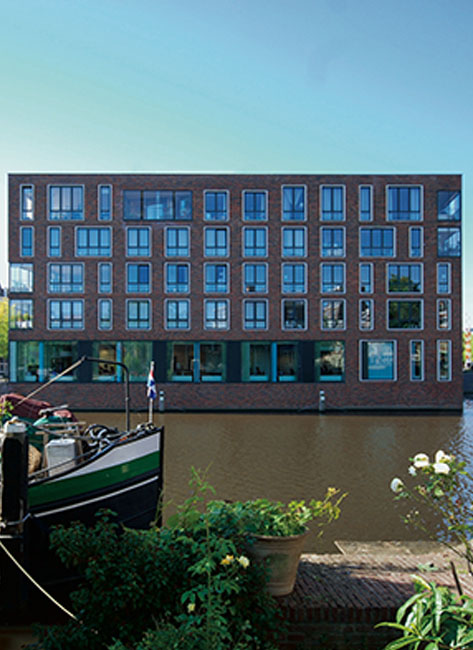