After the bombing of Rotterdam in May 1940 Willem van Tijen was commissioned to design one of five planned high-rises on the Zuidplein (Extension Plan Zuid, 1938). The first design phase coincided with the work on the Studie Woonmogelijkheden in het nieuwe Rotterdam (Study on housing options in the new Rotterdam), a joint venture between Van Tijen and the architecture firm Brinkman & Van den Broek and Maaskant. ‘In 1940, deeply impressed by the violence and destruction and the immense threat to our identity, we tried to put this out of our minds by trying to form a picture of what would have to be built after the war’ (Van Tijen,1970). The study was supposed to produce a sample of housing solutions that were effective on both a planning and an engineering level. Among the models that were developed was ‘the tall housing block’ in the form of a preliminary design for the Zuidpleinflat. It accommodated five dwelling types, including large-family homes. Van Tijen’s initial idea, that high-rises were unsuitable for families with children, was superseded by the special circumstances (housing shortage). Early in 1941, when the design was ready for tender, the German occupier called a building freeze and the preparations were discontinued. 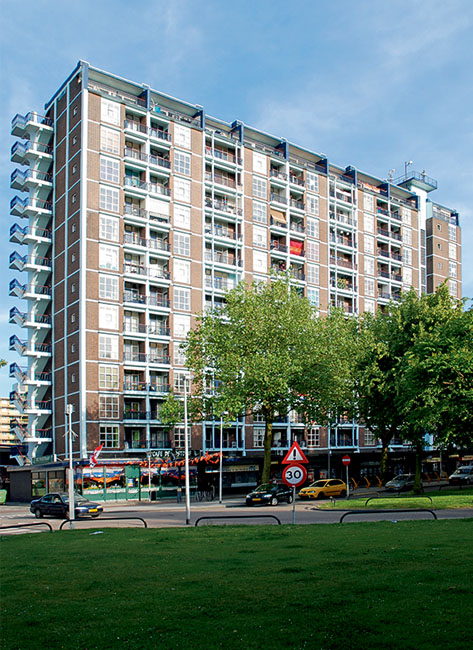