The second Nota Ruimtelijke Ordening (Policy Document on Spatial Planning) prompted Leusden’s designation in 1996 as a growth core in the Amersfoort region. A new structural plan formed the basis for the village’s expansion, citing English new towns with their low-density housing. Several years later, one of the authors of the plan, David Zuiderhoek, designed Park Rozendaal, an experimental residential neighbourhood within the plan comprised exclusively of low-rise buildings for the middle classes.

Park Rozendaal forms a clearly demarcated and recognizable enclave, thanks to its highly individual and unequivocal design. The neighbourhood’s plan is based on a series of overlapping circles of the same diameter, distributed over the area in a regular pattern. The housing blocks comprise segments of these circles which are grouped to create small, oval spaces between the blocks. These spaces, the woonerven, are used for parking, play and communal activities. The residents have a say in the layout of the woonerven, so each of these spaces varies slightly.

The only through road in the plan winds between the blocks and the green zone, providing access to some of the woonerven; the remainder are accessed from the outer edge of the neighbourhood. The amorphous space to the rear of the blocks is laid out as a park with communal facilities that include a swimming pool and tennis courts. Areas of water run through the neighbourhood and a large number of footpaths ensure that virtually all parts can be reached without motorized traffic.

Management of all the communal areas, including the swimming pool and tennis courts, is in the hands of the residents and is organized through a foundation in which all 12 woonerven are represented. Maintenance is financed by a compulsory monthly contribution paid by the residents.

The housing blocks, designed by Henk Klunder, contain 478 identical, three-storey drive-in dwellings with a poured wall construction with washed concrete elements and aluminium, sliding French windows. Staggering the façades where the individual houses meet identifies each individual dwelling. Transitions between the private and the communal domain are subtly indicated by small protrusions, a projecting balcony and plant boxes. The windowless side walls are decorated with reliefs by artist Bouke IJlstra.

Each dwelling has its own garden to the rear, bordering on the park. Over the years the original provision for a gentle transition between private and communal has been undermined by the erection of fences. Inside the houses there is plenty of opportunity for individual freedom of choice: each storey can be arranged in four different ways, which amounts to a total of 64 options (4 x 4 x 4). High building costs were ultimately responsible for the original plan’s provision of approximately 1100 houses being reduced by half. 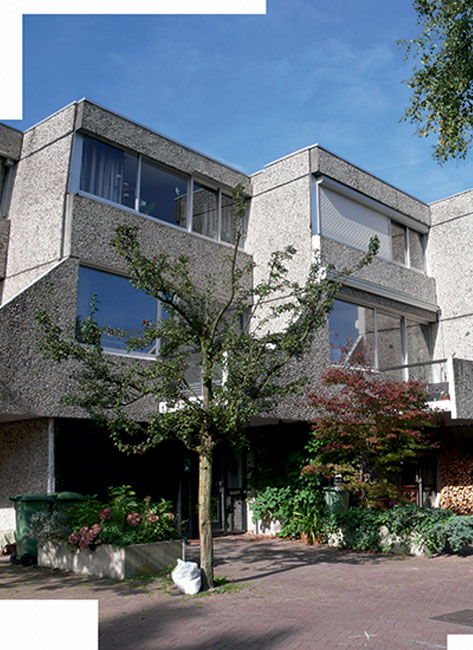