From the early 20th century onwards, Haarlemmerhout and the more easterly country estate Oosterhout were developed as a residential area. In 1900 landscape architect Leonard A. Springer drew up a master plan modelled on the English garden suburb. It envisioned spacious plots for detached houses, as well as long rows of seried houses with deep back gardens. The seriated development was probably needed to generate bigger land revenues during a downturn in the economy.

Housing Association Tuinwijk, which had a social remit, commissioned architect Van Loghem in 1918 to design section plan Tuinwijk-Zuid. It covered the subsidized construction of medium-sized dwellings.

Van Loghem’s socialist ideas about a sense of community spirit among residents and the garden as a cohesive force played a major role in his adaptations of Springer’s design. Van Loghem retained the curved pattern of avenues, but left out the original middle avenue and extended Zonnelaan, thus creating space for communal courtyard gardens. The internal space was made even bigger by situating the perimeter walls right beside the streets and by reducing the depth of the back gardens, separated by privet hedges, to approximately 5 m. The shared front gardens form a transitional zone between public street and private home. The two blocks are traversed by a path that closely follows Springer’s middle avenue.

The courtyard gardens promptly caused financial problems: the excessive ground rent nearly bankrupted the housing association. The proposal to subdivide the courtyard gardens in a bid to generate more land revenue was rejected in the end, for fear it would damage the project’s reputation. From the outset, the gardens were seen as a strong feature.

As is common in garden suburbs, the architectural device of straddling passages to the internal space is used to evoke urbanity. Where it approaches these gatehouses Tuinlaan has been widened on either side, while the gatehouses themselves are one storey lower than the neighbouring houses. On either side of the gates are two tall chimneys that form a clear demarcation, especially when seen from the courtyard gardens.

Life here centres on the courtyard garden. With the kitchen and utility rooms situated street-side and the living and dining room at the rear, the traditional floor plan has been reversed. The same does not apply to the south-facing houses on Spaarnelaan. These dwellings have a traditional en-suite organisation with the kitchen at the back.

The rear walls of Tuinwijklaan and Zonnelaan, especially, lend Tuinwijk-Zuid a certain dignity. With their large identical windows the rear elevations are both more formal and understated than the front façades, which are particularly striking with their wood-clad balconies above the projecting storage spaces and their rooftop pergolas. In a bid to avoid monotonous back façades Van Loghem has articulated them like he did the front façades, by having the dining rooms jut out 1 m.

The wooden pergolas at the front resemble little rooftop bowers, not least because of the material used; they were meant to be covered by greenery. From the outset however, these spaces were rarely used for sunbathing, because the majority of the residents opted for the quiet, pleasant space at the back. 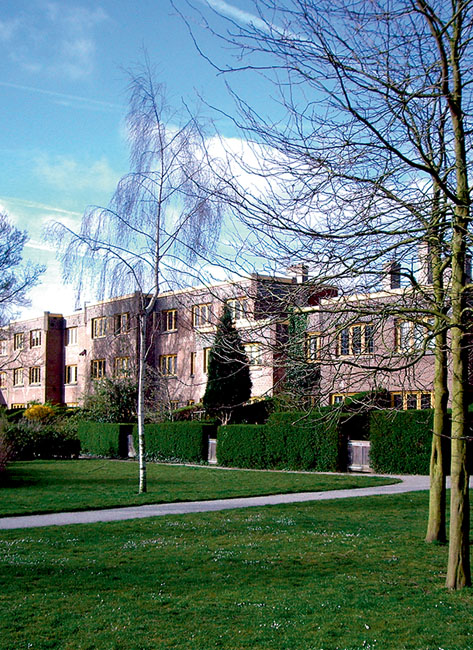