De Rietlanden in Amsterdam, an ensemble of four tower blocks and a multi-storey car park designed by VenhoevenCS, forms part of the much more comprehensive Rietlanden project in the Eastern Docklands Area. It is dominated by various forms of infrastructure: train, tram, ring road and Piet Hein Tunnel. The residential development forms part of a triangular block, which comprises a strip of private homes along Oostelijke Handelskade to the north and – originally – train tracks to the south.

The incumbent residents, squatters at Oostelijke Handelskade, had a considerable input in the design. The first sketches of the urban plan put forward by the city of Amsterdam (Ton Schaap) showed an enclosed fringe development on the south side. The final design featured a series of tower blocks, ranging in height from eight to eleven storeys, aimed at admitting both light and a view for the incumbent residents.

The development is bisected by a road from Oostelijke Handelskade to the car park; this road has been extended for pedestrians and cyclists to the public transport junction in the south. Another public path runs east to west, past the car park and along the bottoms of the gardens of the existing houses. A thick reeded bank has been planted as a kind of formal boundary between this path and the back gardens.

Unusually, the entrances to the tower blocks are on the ‘inside’; because of the heavy infrastructure on the south side access here would be inappropriate. The tower block entrances also enhance the public character of the parking deck. Shallow steps and ramps link this square, which features a basketball court, to adjacent paths. Two of the tower blocks can be accessed from a public north-south passage; these two have commercial premises at ground-floor level. The two other tower blocks can be accessed from the higher deck. The apartments on the ground floor border directly onto the public area, separated only by a large glass façade.

Hardly any two apartments in the tower blocks are identical. The complex stacking arrangement includes flats with doubleheight spaces, with multiple entrances and with differences in floor and ceiling level.

The silver, aluminium façades and special shape lend the tower blocks an alienating, almost floating effect, concealing the individual units inside. The towers have a dual orientation: the top points towards the north side, the water front, whereas the ‘backpack’ on the south side looks out across Piet Heinkade. The plinth has been rendered in materials inspired by the world found at ground-floor level: the steel grids of the towers are mirrored in the cladding of the car park walls. The deck’s detailing is equally robust and sleek with its stainless steel railings and concrete elements.

The multi-storey car park is owned by the city, as are the deck and public paths. The freehold apartments and rental properties are managed by a developer and a Homeowners’ Association – a complex construction. 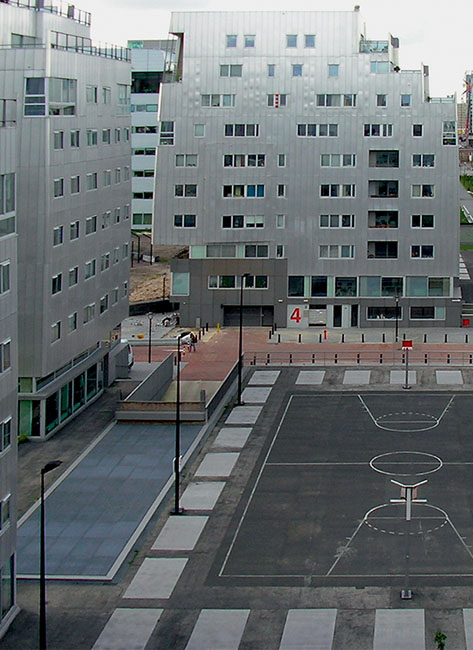