One of the smaller courtyards

De Grote Hof is a Rapp + Rapp project in Ypenburg, a so-called ‘Vinex’ location in The Hague. It forms part of De Venen, a section of Ypenburg that stretches from Nootdorp to the A12 motorway. The neighbourhood’s layout was inspired by the morphology of the greenhouses that have left their mark on this area, including the ribbon development of large farmhouses and the adjacent greenhouses themselves (at some distance from the road).

In the urban design for De Venen (by Palmboom & Van den Bout) these elements have been translated into semi-detached houses along a central street, Veenweg, and several complexes grouped around one or more courtyards. The northern-most courtyard complex was designed by Christian Rapp.

Rapp’s design for De Grote Hof turns the traditional closed urban block inside-out. Five virtually square courtyards measuring 230 x 250 m accommodate 246 homes. All of these homes face inwards, while the individual gardens are situated on the outside. The complex as a whole is framed by a canal.

The decision to situate the gardens on the outside might have made the place look cluttered. And to some extent it does, were it not for the fact that a uniform vegetation plan to separate the gardens is gradually taking shape, thus concealing all the different fences. The plan’s taller middle section rises a few metres above the garden fences and lends the development a visual unity.

De Grote Hof has five courtyards. Four of them are square and roughly the same size, while the fifth is rectangular and, at 16 m in length, much larger than the other four. The smaller courtyards have a completely different character than the rectangular courtyard. The architect describes it as the difference between a village green and an urban square.

The difference in atmosphere derives not only from the difference in scale, but also from the architectural styles of the ‘transitional zone’ between the individual homes and the courtyard’s communal space. In the four small courtyards, this zone is marked out in the paving and partitioned off for each home with small fences. The zone is 1.6 m wide and uncovered. Residents can sit in front of their homes here and make contact with their neighbours, something that is facilitated by the courtyards’ modest dimensions. If they prefer not to meet their neighbours they can sit in their back garden. The informal architecture appears to complement the casual contact between the residents of the four small courtyards.

The rectangular courtyard makes a more metropolitan, formal statement. The transitional zone between the communal courtyard and the private homes consists of a covered circular colonnade measuring approximately 2.3 x 9 m. The carefully designed columns are made of prefab concrete and fitted with special lighting features.

The houses along the rectangular courtyard have been built in back-to-back style. Their residents have no gardens, so if they want to sit outside they will have to use the space underneath the colonnade. They do so quite regularly. But at the same time, the residents say they scarcely know their next-door neighbours and do not know the people across the courtyard at all. The colonnade’s formal, urban character and the courtyard’s large dimensions are probably to blame. 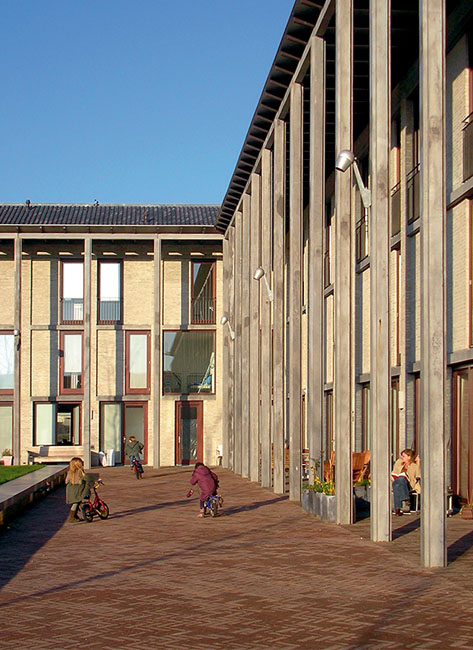