The Private-Public Paradox of the New Open Space

The paradox of the new open space in housing ensembles is its ambiguity: it attempts to be both public and private.2 A stranger casually wandering into Mariaplaats, a modern labyrinth of alleys and little squares surrounded by sober reddish-brown walls and paving stones in the historic centre of Utrecht, might register a pleasant feeling of recognition but simultaneously of estrangement. Mariaplaats is reminiscent of the old Dutch hofjes, but this is not charitable housing – and there certainly are no neighbours here, chattering as they hang out the wash. On the contrary, the atmosphere could sooner be described as anonymous and distant. For what and for whom are these little squares intended? Who actually uses them and in what ways?

Newcomers who stroll around the ‘country estate’ of Zwanenwoud in Heerenveen will enjoy the French formal garden layout of the grounds and the castle-like silhouettes bordering the large green, but at the same time feel slightly confused: Is this a public park? A private garden for the residents of the adjacent villas? Or is it the other way around, and are passers-by invited to look at the residents on their terraces?

A visitor who enters the raised central court of De Grote Hof in Ypenburg most likely will gaze in amazement at the impressive space – it’s as if one is entering a courtyard like that of the Louvre – and at the same time might feel some hesitancy when confronted with the intimacy of a Sunday morning breakfast enjoyed by a group of residents under the colonnade.

Such paradoxical experiences are what make these spaces so fascinating. Moreover, the architectural solutions for these ambiguities turn out to be exceptionally ingenious and never twice the same. Mariaplaats is a small inner-city project with many different inner spaces and a variety of housing types built in high density; Zwanenwoud comprises a large area of land and dwellings that are few in number, and De Grote Hof is an isolated enclave of both low-priced and expensive homes.

As was stated in the introductory essay, this ambiguous new open space in the city is the result of several lengthy historical developments and contemporary issues, including the Dutch tradition of dwellings that directly border the street and a rising demand for urbanity and new public domain. These two central issues are in fact two sides of the same coin. And in the case of these ensembles they lead to new interpretations for housing (private life) and the public domain (public life). The old meanings of these categories shift and lose their unequivocalness.

The new open space brings urban life into the traditional perimeter block through visual links with the city and by permitting entry to other users, such as casual passers-by. These new public residential domains can contribute to a differentiation of public space that ranges in scale from voyeuristic intimacy to mass manifestations.

To further an interpretation of this paradox of the private-public character of the new open space, we will investigate a series of projects that show the range of the new open space as we have encountered it thus far, with the intention of coming up with tools with which to designate the new open space as a task for designers. Furthermore, an analysis of these projects will put forward arguments for a discussion about the significance of the new open space for both residents and the city. This investigation, which reflects several years of design and research projects within the Chair of Architecture and Dwelling at Delft University of Technology, approaches the complex subject of housing and city from an architectural perspective.

The projects will be examined on the basis of their urban design and architectural characteristics in terms of the new open space. The urban design aspects involve the relation between the complex and the city and its location in the network of public spaces, including the organization of routes. For the architectural aspects, our analysis focuses on the form and expression of the new open space and on the articulation of private and/or public characteristics within the complex. 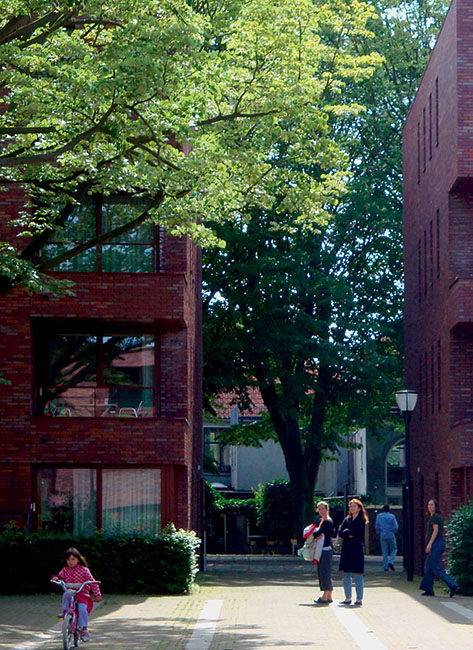