Between Seriality and Monumentality

The Architecture of the New Residential Court

The website of De Grote Hof in Ypenburg features the following recommendation alongside the building’s logo: ‘Hoffelijk wonen, vorstelijk leven’,1 which translates roughly as ‘courtyard homes, royal living’. The website ascribes the distinctive living experience to the fact that the development is not like adjacent neighbourhoods. Whether its residences really merit the adjective ‘royal’ remains to be seen, considering the far from generous floor plans displayed on the website. The slogan appears to refer mainly to the development’s distinctive architecture: five monumental courtyards, linked to form a large residential palace that can be recognized from a distance, thanks to the impressive sculptural aspect of the dark brick façades.

De Grote Hof is not unique. All over the Netherlands projects are realized in which an enclosed, communal space determines the character of living.2 The special design of the communal space is marketed as a unique selling point for the individual homes. This enclosed space is often set back from public routes and is only accessible via narrow alleyways or gates. The clear-cut architecture forms a contrast with its surroundings. Although the projects are mainly comprised of terraced houses – a constant in Dutch housing – the façades give nothing away. The communal space derives its distinctive character from a broad range of architectural modifications, which are neither unambiguous nor pure. This results in urban spaces with a certain ambiguity vis-à-vis the public and/or collective character of the area. This ambiguity also affects the traditional relationship between the private domain of the dwelling and the public domain of the city, and consequently also the internal layout of the dwelling.

In these recent projects, serially linked dwellings in a block or a row are enhanced by classic compositional devices such as hierarchy, symmetry, framing and monumentality. Architectural elements such as entrances, eaves and urban plinths are magnified, thus reinforcing the communal identity. This modification ties in with the housing tradition that has its origins in the city palace.3 The Southern European apartment building, the German Mehrfamilienhaus and the French maison à loyer are types of building that originated in this tradition. Architecturally, these buildings evoke the autonomy of a single, large villa, but they are designed to accommodate several families. This tradition contrasts with the Dutch model, in which individual homes adapt to the architecture of the urban block. The urban villa is an independent architectural entity in between the individual dwelling and urban architecture.

In order to decode the architecture of the new residential courtyard, 4 we set out to compare it to the typology and architecture of the Dutch terraced house and to that of the French courtyard building. How is collectivity shaped in these two models? How does the relationship between public and private crystallize? What is the urban signification of the communal space? 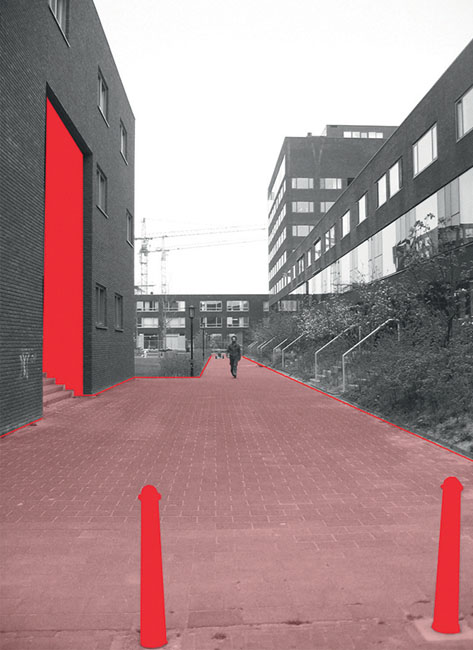