Architecture and the Time of Space: The Double Progression of Body and Brain

During my early introduction to architecture I found that I was motivated not only by matters pertaining to what architecture is, but also, to what it can do. Thus, the questions motivating this work derive from my education in architecture which, at their most rudimentary level, entail a deep fascination with the nature of space, and thus the problem of time. And, subsequently, a practical desire to understand the conditions that constituted experience, and thus perception, sensation and mind. My interest also developed from a general disposition towards others and world founded in principles of human equality and rights with respect to both freedom and responsibility. During my years practicing architecture, these questions as they were brought through the perspective of design continued to inspire me. At the same time, my interest in investigating these questions through theoretical and philosophical research persisted until my aspiration to engage in critical thought outpaced my desire to practice. Hence, a turn in career to work as an academic in the discipline of architecture and the area of architecture theory.

This research may be perceived by some as situated outside the realm of architecture. However, this is not the case. My approach to architecture theory is not one that begins with a study of the object, or, for some, one might say the subject of architecture. That is, if the object is understood as the manifestation in thought, process or form of the building or built environment (real or conceived) itself; and if the subject is understood as the thought or idea emanating from the mind of the architect (as author). While there is much architecture theory advanced from this perspective lining my own bookshelves and utilized in my work as an educator. The concerns that have always called me towards thinking about architecture as the imagined and constructed world in which we live are those that query the very nature of concepts, notions, ideologies and intellectual constructions and beliefs upon which culture and society – architecture as both a cultural product and a social actor – are formed. This goes, as well, to the considerations that motivate my concern for people, not users or inhabitants as such, but as ontologically situated beings in the world. Accordingly, my work primarily deals with the content, history and effects of architecture as it relates to theories of space, time, the body, and cognition. Employing and developing theories and methods from disciplines including philosophy, cultural studies, literary theory, political, social and economic theory, cognitive psychology, and the neurosciences in the broadest sense.

Admittedly, the nature of theoretical discourse has shown itself to be problematic over the past fifty-plus years; it has also proven to be transformative. Critical thinkers in the late 1960s developed a sustained critique of their philosophical predecessors – primarily in regard to Marx on one hand and Heidegger on the other – with a critique of social history and a displacement of metaphysics resulting in a repositioning of social and cultural discourse. Of course, the debate unfolded against the philosophical and aesthetic background of not only Marx and Heidegger, but also Nietzsche, Hegel and Freud on one hand, and Manet, Cézanne, Baudelaire and Mallarmé, Wagner and Debussy on the other. In architecture, the debate extended to Ruskin and Wölfflin, and to Wright and Corbusier, amongst others. This period, in itself, refers to an unprecedented artistic, scientific, economic, and technological mutation. Prevalent underpinnings remain identifiable, for instance an attack on the absolute nature of knowledge, which has brought about a fundamental rethinking of both the nature of consciousness, as well as a critique of science. As Foucault suggested, one of the great problems that arose in the 1950s was that of the political status of science and the ideological functions that it could serve. Another rebuke can be seen as the challenge to the primacy of truth as an adequation of subject to thing. This culminated in a radical critique of subjectivity resulting, some years later, in the so-called post-humanist-subject. In order to be rid of the subject itself, Foucault, in ‘Truth and Power’ (1977) argued that it was necessary to dispense with the essentialist subject both at the extremes and in-between the enlightenment’s humanist subject and its ideals of knowledge as self-constituting; as well as phenomenology’s fabrication of the subject as evolving through and embodying the course of history.

Reflecting on this history, that post-war moment of theory, one cannot help but be struck by the complexity and the ambiguity of the adventure; qualities most evident in the fact that new spaces and new means of writing and drawing, of thinking and making emerged. Ideas that modified our understanding of both communication and the image, of both space and time. Discourses, when combined with a reflexivity within certain architectures and certain texts, rendered them somehow indefinitely open. In the 1960s, literary theory transformed thought on both sides of the Atlantic. For instance, Roland Barthes’s de-sanctioning of the biography-centric author, or the removal of authority from the author turned scriptor in ‘The Death of the Author’ (1967), or Julia Kristeva’s concept of intertextuality with ‘Word, Dialogue and Novel’ (1969). These works impacted our thinking on linguistic phenomena and the origin (or non-originality) of textual content and further, on the invention of new forms of writing and affective relations. Such theories informed and redirected thinking in architecture, for instance, Diana Agrest and Mario Gandelsonas’s work ‘Semiotics and Architecture: Ideological Consumption or Theoretical Work’ was published in the first issue of Oppositions, an architectural journal produced between 1973 and 1984 by the Institute for Architecture and Urban Studies in New York. With this, the influence of the French intellectual climate as well as the Italian discourse on semiotics was brought to the centre of Anglo-American discourse in architecture theory.

The intellectual trajectory along which this history is traced and the terrain on which it now takes place will be recognisable to anyone familiar with the work of such thinkers as Henri Bergson, Louis Althusser, Gabriel Tarde, Walter Benjamin, Pierre Bourdieu, Michel Foucault, Jacques Derrida, Jacques Lacan, Jean-Francois Lyotard, and, of course, Félix Guattari, Gilles Deleuze, and Maurizio Lazzarato. The importance of the radically original works that emerged in the seventies and eighties cannot be overestimated, for instance: Foucault’s Discipline and Punish and his lectures at the Collège de France, The Birth of Biopolitics, and Deleuze and Guattari’s Capitalism and Schizophrenia volumes Anti-Oedipus and A Thousand Plateaus. These works, translated into English shortly after their original publication, were being read throughout many disciplines outside of philosophy including schools of architecture, and their influence can only be said to have increased.

I share the above brief history so as to situate my work for those less familiar with the work of theory – whether architecture or otherwise – as this, too, is the intellectual trajectory and exploration along which my own work, as well as many of my contemporaries, travels. In my own work, the influence of the nineteenth/ twentieth-century French vitalist philosopher Henri Bergson – the great thinker of time and, as Walter Benjamin suggested, a seminal source to consult in considering the problem of experience – has quite profoundly informed my thinking and shaped its outcomes. Both with respect to time and space as well as body and brain, his influence is reflected in the title of this volume. That said, this is not a collection of chapters on Bergson’s philosophy. It is a collection on critical concepts I believe to be of importance for contemporary critique, delivered through topics that are relevant – at times directly and at others indirectly – to our current moment. This is a work of great commitment and it has sustained itself over time. It is my hope the reader finds some value in this as well.

Ansell-Pearson, Keith. Philosophy and the Adventure of the Virtual: Bergson and the Time of Life. London and New York: Routledge, 2002.

Grosz, Elizabeth. Architecture from the Outside: Essays on Virtual and Real Space. Cambridge MA and London: The MIT Press, 2001.

Hauptmann, Deborah and Warren Neidich. Eds. CognitiveArchitecture: From Biopolitics to Noopolitics. Architecture & Mind in the Age of Communication and Information. Rotterdam: 010 Publishers, 2010.

Hauptmann, Deborah and Andrej Radman. ‘Asignifying Semiotics as Proto-Theory of Singularity: Drawing is Not Writing and Architecture does Not Speak.’ In Footprint. Issue 14 (Spring 2014): 1-12.

Kant, Immanuel. ‘Analytic of the Beautiful’, from the Critique of Judgment. Trans. Walter Cerf. Indianapolis: Bobbs-Merrill, 1963 [1790].

---. Critique of the Power of Judgement. Trans. Eric Matthews. The Cambridge Edition of the Works of Immanuel Kant. Cambridge and New York: Cambridge University Press 2000 [1790].

---. ‘Idea for a Universal History with a Cosmopolitan Point of View’. Trans. Pauline Beck. In Anthropology, History, and Education. Cambridge: Cambridge University Press, 2007 [1784].

Kwinter, Sanford. Architectures of Time: Toward a Theory of the Event in Modernist Culture. Cambridge, MA and London: The MIT Press, 2002.

Lazzarato, Maurizio. ‘The Concepts of Life and the Living in the Societies of Control’. In Deleuze and the Social, ed. Martin Fuglsang and Bent Meier Sorensen. Edinburgh: Edinburgh University Press, 2006. 171–90.

---. ‘Space and Geometry’. Trans. T. J. McCormack. In In the Light of Physiological, Psychological and Physical Inquiry. Mineola: Dover Publications, 2004 [1906].

Mach, Ernst. The Analysis of Sensations and the Relation of the Physical to the Psychical. Trans. C. M. Williams. Chicago: Open Court, 1914 [1897].

Santa Monica: Getty Center for the History of Art and the Humanities, Getty Trust Publications, 1994.

Pallasmaa, Juhani. The Eyes and the Skin: Architecture and the Senses. London: Academy Editions, 1996.

Rabinow, Paul. Marking Time: On the Anthropology of the Contemporary. Princeton and Oxford: Princeton University Press, 2008.

Rushkoff, Douglas. Children of Chaos: Surviving the End of the World as We Know It. London: Flamingo, 1997.

Varela, Francisco and Humberto Maturana. Autopoiesis and Cognition: The Realization of the Living. Boston: Reidel Publishing, 1980.

Varela, Francisco and Andreas Weber. ‘Life after Kant: Natural purposes and the autopoietic foundations of biological individuality’. Phenomenology and the Cognitive Sciences 1 (2002): 97–125.

---. ‘Natural-Historical Diagrams: The “New Global” Movement and the Biological Invariant’. Cosmos and History: The Journal of Natural and Social Philosophy 5, no. 1 (2009). 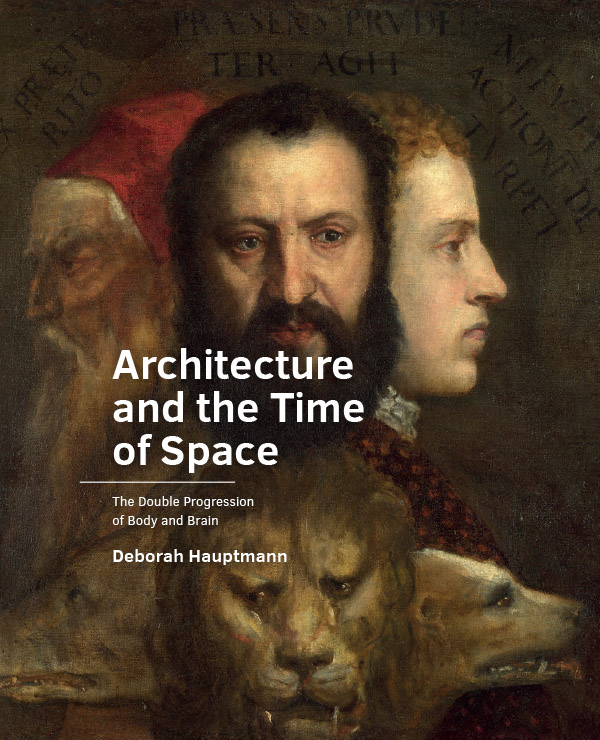