Aim and outline of the research

The aim of this dissertation is to identify and classify the various Holland country houses landscapes based on the most important factors and motives involved in building of the large amount country-houses between 1630 and 1730. The method combines research to tangible and intangible aspects of the spatial designs of country houses and their surroundings. The main research question is: what physical, societal and mental factors determined the position, orientation and composition of country estates in Holland built or transformed between 1630 and 1730? A second question is: can country estates be grouped on the basis of similar location and composition factors?

The research area is Holland and the period covers the years between 1630 and 1730. During this period Holland was the most influential province of the Republic of the Seven United Provinces. New was its form of government led by an upcoming urban elite with no noble origin. The urban elite created a new way of living for themselves.In the city, their houses were built according to the new fashion at streets planted with trees and with large gardens. Similarly they build country estates in the new way in the rural landscapes. In this study the word historic country estate is addressing the house and its garden as an ensemble and this is used for country houses (landgoederen) with a more rural function, as well as for suburban villas (buitenplaatsen) referring to houses for recreation and pleasure.

The research on classifying groups of country estates is based on a combination of cartographic research and a literature study of historic books on gardening from that period and is worked out on three scales. The research combines the distribution map with the most important themes, based on the literature study. Central to this study is the identifcation of the physical and compositional factors as well as the motives, determined by experience and use by creating of country estates and together they for the physical, social-societal and mental aspects. The most important themes were infrastructure, city and landscape. This information was combined with historic research to elements of the seventeenth century landscape, understanding the physical landscape. Information on personal social and mental motives of the owners for building the estate based on their descriptions in letters, books and diaries of the use and the experience of a country estate.

This research implies that the analysis encompasses not only the reading of the landscape but also the reading the authorship of the urban elite. People often used the Dutch word ‘Welgelegen’ to describe their choices, the word used in the title of this thesis. The word strictly means “well positioned” in modern Dutch but the descriptions show it can be interpreted better as well-functioning and entertaining.

The most important physical factors and motives, the answer to the first research question, were: a favorable location in the landscape (i.e., fertile soil, water, height differences, landscape gradients); a position along good and “entertaining” infrastructural connections (land and waterways); and a favorable relation with the city (view of and mental link to a city, accessibility and travel time). The factors were analyzed in relation to the described ideal layout of the plot (chapter 4), to the available infrastructure (chapter 5), to the landscape (chapter 6) and to the city (chapter 7). The three most important motives, stressing the mental and societal aspects were finance, societal and recreation.

Urban culture was found to be an important location and composition factor for the construction of country estates. This implies that country estates featured specific urban signatures, related to a specific city, its economy, its specific smell or industry. The analysis showed that country estates were part of the new fashion of living of the elite in a ‘green’ environment by the urban elite. This applied both to the house in the city and to the country estate situated in the rural landscapes. The construction of country estates is closely linked to the introduction of trees in the public realm, especially in the new-city layouts but also along the roads connecting the cities with the country estates. The self-conscious citizens chose not only to have a house in a modern architectural style in a rational layout, but also to have trees planted in the public space, so creating well-situated places. View lines to and from the city were important composition factors for most country estates (Chapter 7).

The system of heerwegen (main road system between cities) was an important location and composition factor for the majority of the country houses in Holland. This had to do not only with the accessibility, but also with the sense of a pleasant land road. The pleasantness of the road was partly determined by trees on both sides of the road planted at regular intervals. For a particular group of country estates the first phase of the creation of barge canals (1631-1647) became an important location and composition factor because of its novelty. Transport of burghers was organized on these canals according to a fixed timetable with horse-drawn ships or barges (trekvaart). It was important for the urban elite to be seen by the good citizens in the barge vessels passing by every hour or so and to enjoy the sight of the traffic on the canal. During the second phase of the creation of barge canals (1655- 1701), most country estates had already been founded. The old trade routes on water preexisting the barge canals were neither a location factor nor a composition factor (Chapter 5). Road accessibility, the appearance of water infrastructure and its status were probably decisive in the choice of a location for a country estate and for the composition of house and garden.

The landscape played a major role as a location and composition factor for country estates. Soil fertility was not primarily determined by the soil itself (sand, peat, clay), but mainly by the gradients between two types of soil; this way the water would flow and plants, trees and animals could flourish. Country houses were built on different types of soils; the coastal sandy landscapes, the rivers and their clay riverbanks and the newly drained polders, mostly consisting of peat. The choice for one of these landscape was made by the owner. Important factors were gradients in the landscape, availability of water and fertility, but also the sense of landscape beauty, the feasibility of recreation and the general sense of well-being. Spring and fall migration of small birds (vinken) and the use of the North Sea beach were important recreational features of the physical landscape, important for hunting and socializing with peers from the same social class that had similar interests. In the new drained lake polders the location of the country estates was determined by the owner’s status and position in the consortium, a group of wealthy people investing the drainage of the polder. The country estates were built near “entertaining” roads and were modest in size because the main function of these country estates was agricultural (Chapter 6).

Identifying individual country estates as parts of different country-houses landscapes explains why the three suburban villas Hofwijck, Zorgvliet and Clingendael, situated close to each other, have such different compositions. It explains the often mentioned pluriformity of country estates as the result of different choices by the owners for the scenic, well-situated places and particularly their different motives. Country estates landscapes form a physical constellation with similarities in physical factors, social inspiration and motives. It makes a coherent narrative possible based on comparable social and mental aspects. 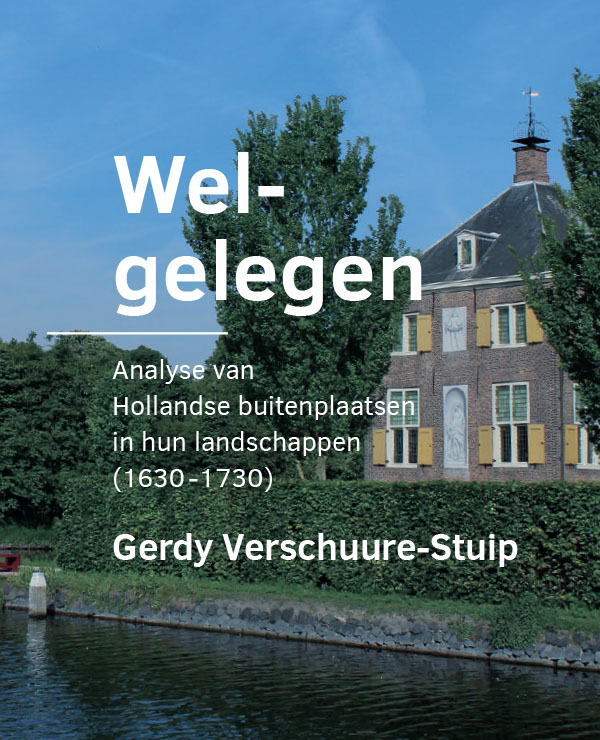