When N.V. Lettergieterij Amsterdam, formerly N. Tetterode, left its Bilderdijkstraat premises in 1981, a developer wanted to replace it with luxury apartments and shops. In protest against these plans, squatters occupied the building. Five years later, the city bought the building complex and the squatters, united in a single cooperative, were able to rent the building shell from housing association Het Oosten. Holslag van Nek van Hoek Architekten renovated the complex and performed a number of interventions to ensure that it was safe to use. The most striking of these was the removal of part of the roof over the factory hall between the buildings, creating an inner courtyard and escape route.

The realization of this living and working community within a robust shell brings John Habraken’s ideas to mind: the industrial building complex designed by various architects is the support (base building); the infill (fit-out) is created by the users. Habraken believed that it was necessary to take action to reside and that appropriation would lead to identity. Read this way, squatting and the resulting living and working community are exactly what he was aiming for.

Mikel van Gelderen is an artist, scenographic designer and architect. Together with Jurjen Zeinstra he founded Zeinstra van Gelderen architecten, the firm that realized the residential and office building on IJdock in Amsterdam and the Bushuis in Ede. He was an editor of OASE journal for architecture and a guest lecturer at the Politecnico di Milano; he teaches at Delft University of Technology and the Design Academy Eindhoven. 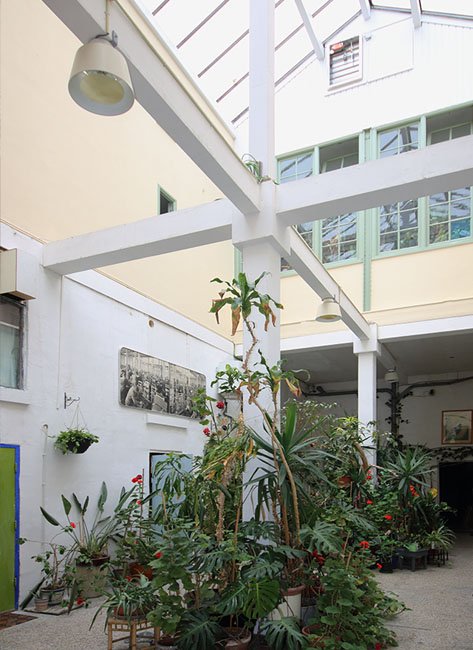