In today’s service economy, the functional zoning typical of modern urbanism is no longer self-evident. People’s domestic and professional lives increasingly take place in one and the same domain. They need a different type of city, one that accommodates a wide variety of programmes, with tailormade facilities that allow combinations of living, working and care. This issue of DASH focuses on the building block as the spatial cornerstone of this development. It is where the individual dwelling, the collective domain and urban life meet.

Workhome blocks that combine new ways of living and working are more than commercial bases topped by a couple of dwellings. Historical projects abound, but contemporary workhome blocks are more difficult to find. Apparently, many of the parties concerned need time to get used to the idea of realizing such projects. What is required, in short, is a cultural transformation. This is why the essays and examples in this issue are a plea for a different way of building.

Eireen Schreurs is an architect, educated at Delft University of Technology. With Like Bijlsma she founded SUBoffice architecten in Rotterdam, a practice with a focus on issues concerning the public and the collective, both in built work and in research. She teaches at Delft University of Technology and KU Leuven (Sint-Lucas Ghent) where she also holds a PhD position. Her research topic is the influence of material practices on the development of architectural culture. She is a member of the Jury of the Geert Bekaert Prize for architecture critique, a co-editor of the recent publication The New Craft School (2018), and she regularly writes for architecture magazines. 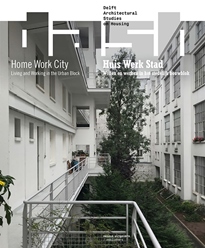