Addis Ababa, the capital city of Ethiopia, is one of the 35 fastest-growing cities in the world. According to predictions by UN-Habitat (2015), in this decade the population of Addis will grow from 4.1 to 4.9 million. Even though it is always debatable how slums are defined in Addis Ababa, UN-habitat estimates that 76.4 per cent of the total urban population lives in slums or under substandard conditions. In 2004, the Ethiopian government started the so called ‘Grand Housing Program’ to eradicate the slums and to care for the urban poor. Cross-cutting agendas here were: 1) to create 200,000 jobs; 2) to promote the development of 10,000 small scale enterprises; 3) to deliver 6,000 ha of serviced land; and 4) to enhance and build the capacity of local contractors, consultants, etcetera. Initial pilot projects were tested in the city of Addis Ababa and later the programme was scaled-up to a nationwide housing initiative. So far, in Addis Ababa alone, 240,000 housing units have been built. Mainly built as condominiums, the dwellings are infills of small vacant lots in the existing city fabric, or are a replacement for slum-cleared areas. But a large number of these condo sites are located on the fringes of the city, like the Mickey Leland Condominium Site. 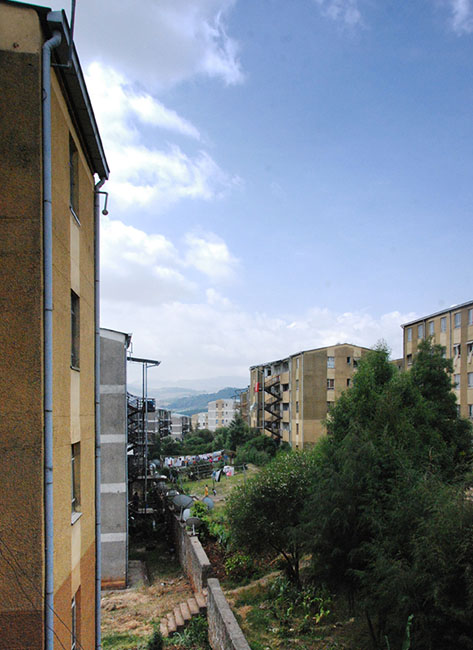