In 1957, Prime Minister Kwame Nkrumah declared Ghana independent. While Ghana was still a British colony, the decision was made to build Tema Harbour, as part of the Volta River Project. Along the way, it was decided that an entire new city in this area was needed. An English planning team began this process in the 1950s, but their carefully designed, winding road patterns didn’t provide the fast paced and rational image that Nkrumah was after. In 1960 he hired Greek planner Constantinos Doxiadis to speed and scale things up as well as rationalize the urban plan.

Doxiadis’s plan for Tema was based on a mathematical system that was rigidly hierarchical, with roads in eight different classes ranging from footpaths connecting houses (Road I) to highways (Road VIII), and residential areas ranging from a small cluster of houses (Community Class I) to the city as a whole (CC V) and even to the larger scale of the metropolitan region (CC VI). The familiar hierarchical order of the English New Towns was significantly enlarged in scale. Doxiadis systematized and took all whimsicalities and irregularities out of the existing urban plan. The first two (already built) Communities of Tema were incorporated in an orthogonal grid of main roads, which delineated a series of identical, numbered neighbourhoods (Communities Class IV), each with their own centre, including shops, high schools and government buildings. Every Community was divided into four smaller parts (CC III), again each with their own centre containing daily shops and primary schools. The direction of the urban grid was slightly diagonal, adjusted to profit from the prevailing direction of the wind. 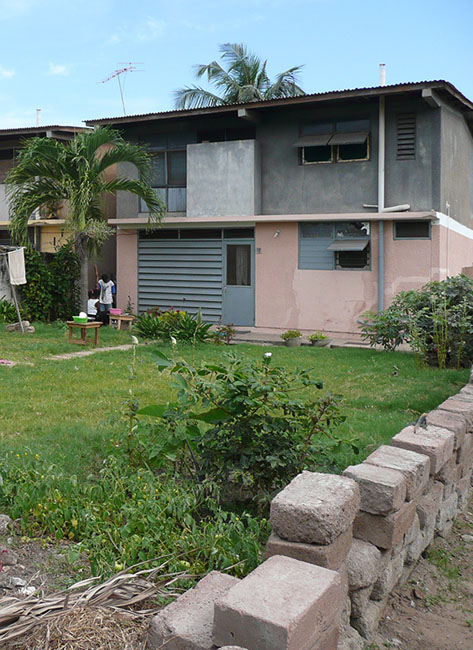