Driving east from the southernmost tip of Central Park in New York City, you reach the Queensborough Bridge after about 2.5 km: it connects Manhattan and the borough of Queens. At the foot of the bridge lies New York’s largest social housing project, Queensbridge Houses, built in 1939 and still in use today.

The Y-shaped floor plan of the residential towers and their location in a park-like setting demonstrate how much the accommodation of poor city dwellers improved over the course of one and a half centuries. For a long time New York, like other big cities, was the scene of the most horrendous housing conditions imaginable. Though slum clearance legislation was adopted as early as 1800 – entitling the city to buy and break down buildings that covered an entire plot (and thus had no garden or courtyard) – the hesitant regulations proved no match for the combination of explosive population growth, prohibitive rents and opportunistic speculative development. Between 1800 and 1850, many parts of the city housed dozens of families crammed into buildings on plots measuring 8 x 32 m, with four housing units per floor, no running water or toilets, and bedrooms without any access to ventilation or light: the so-called ‘railroad tenements’ (because of the similarity to the floorplan of a railway carriage). 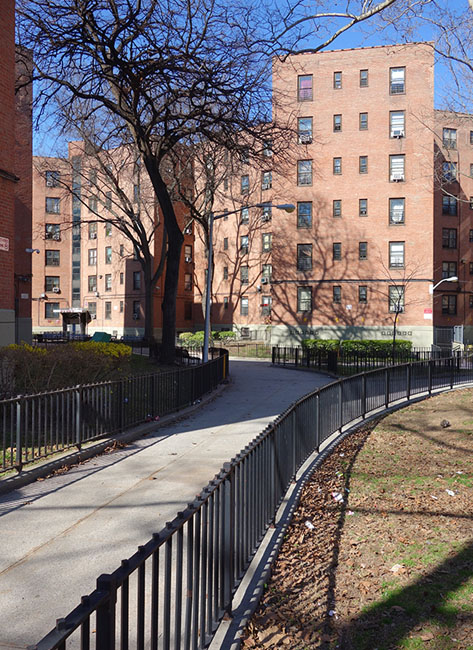