The finishing touches are currently being added to Cronenburgh, a new expansion development in the village of Loenen, which enjoys an idyllic situation on the River Vecht. The plan, designed by West 8, aims to create a strong connection with the existing village and the open landscape. The monumental access avenue is oriented towards the Vecht and an old, domed tea house on the opposite side of the river, while other streets provide sightlines to the church and the village, or conversely to the polder landscape. Two carefully appointed squares form the anchor points in the new development.

In designing the plan’s specifics the West 8 architects took the character of Loenen’s old buildings as their guide. The village consists of individual plots whose buildings are distinguished by traditional forms and materials, forming a patchwork of dwellings, large and small, some rich in detailing, others plainer and simpler in appearance, gardens, rear yards and sheds. This factor, together with the local authority’s stipulation that half the new homes be built by private individuals, produced a unique parcellation in which virtually no plot or dwelling is the same.

The characteristics of the 112 different plots were established in advance in ‘plot passports’ that specified the volume of the building (height, width, roof orientation and ridge height), the position of the building, boundaries and secondary buildings per plot. Together these passports formed a ‘plot atlas’, allowing prospective self-builders and developers to know exactly what would be built on their own plots, and surrounding plots as well. The typology allowed within these strict building regulations was also described: each dwelling is based on a presumed ‘archetype’ of a Dutch house, comprising an unambiguous volume with an individual roof and simple façades and detailing. Despite the strict regulations and robust planning supervision, a remarkable amount of freedom remained for conceiving individual designs. 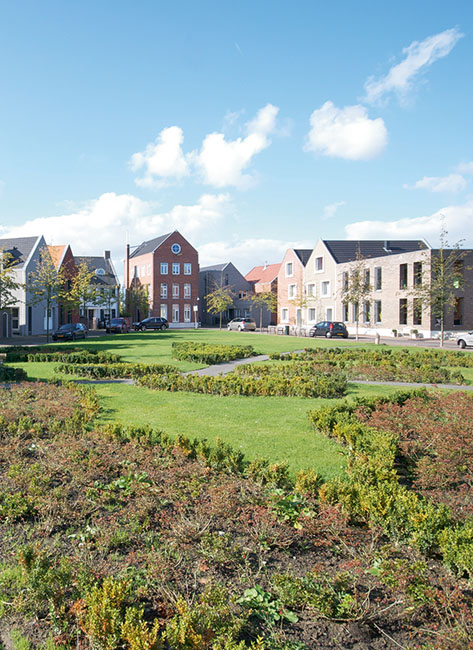