Among the grid of housing blocks on the fringes of Rome, bordering the Via Tiburtina, is a small neighbourhood with a radically different layout. Strips of three- to five-storey blocks in earthy shades of yellow, orange, red and pink form enclosed, informal urban spaces, with here and there some green spaces and parking. Triangular seven-storey tower blocks mark the entrances, while lower hexagonal buildings in the internal courtyards house amenities such as shops and a restaurant. No street or prospect is alike and despite the urban heights the atmosphere is almost rural.

To understand the inception of this neighbourhood, we must go back to the post-Second World War years when, like so many other European countries, Italy faced demands for reconstruction and architects went in search of building methods other than razionalismo, the Italian offshoot of the Modern Movement, whose abstract, neoclassical monumentality was linked to fascism. It was thought to have alienated the common man from his living environment; by updating forms, techniques and materials from the past, the ‘neorealists’ believed that a relationship could be re-established with the common man’s world. A housing initiative launched by the Istituto Nazionale delle Assicurazioni, INA-Casa, had the dual purpose of creating both cheap housing for the working class and maximum employment. Under the auspices of this programme, Ludovico Quaroni and Mario Ridolfi, in collaboration with 11 young architects, designed the neighbourhood which is now seen as a prime exponent of neorealism.

Quaroni based the urban design scheme on Scandinavian examples, which he imbued with an ‘Italian accent’. During the war Ridolfi, the son of an artisan, had coordinated the Manuale d’Architetto, a manual with construction details that formed the foundation for the INA-Casa programme. With his regular collaborator Wolfgang Frankl (a former pupil of Paul Schmitthenner) he seized this opportunity to combine his knowledge of traditional building techniques with ideas about standardizing construction elements, thereby maximizing difference at a minimum cost.

Ridolfi designed the four triangular towers, a number of tower blocks and the shops. The form of the development references rural Italian architectural styles, while its materialization sees a simple finish coupled with contemporary construction techniques. The three-storey slab with an elevated street on the first floor, depicted here, is a reinterpretation of old fisherman’s cottages of the island of Ponza, now made in a combination of stuccoed tufa stone, standardized doors, windows and shutters, and reinforced concrete for the staircases and balconies. The ground-floor dwellings are accessed via a small, street-level patio and those on the upper floors from the elevated street. 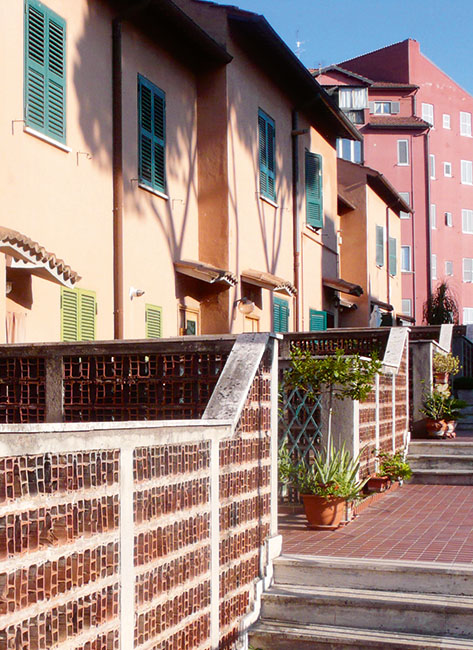