With their Loblolly House, KieranTimberlake Associates realized a virtually entirely prefabricated dwelling in a process characterized by extreme precision. Driven by dissatisfaction with existing building practices, they tried to redefine the relation between design and execution, and also between architects and the building industry. Central to this process was a 3D computer model of the house incorporating each detail in all of its spatial dimensions, with which the construction could be simulated. The prefabricated components were assembled on the construction site within a period of six weeks.

The actual house begins with a scaffolding of struts placed on top of the piles. An aluminium profile system from the Bosch firm was used. Each side of a column or strut contains two grooves, to which brackets can be mounted in order to make connections between the struts. The resulting scaffold – which does not require any readjustment at the construction site – is then filled in with floor and interior wall elements, in which all of the wiring and the underfloor heating is integrated. In Timberlake and Kieran’s vocabulary, these elements are called ‘cartridges’. The façade sections are prefabricated, transported and assembled in a comparable manner. The cartridges, sometimes two storeys high, provide most of the wind- and waterproofing and insulation. This is why the cladding on top of them can exhibit the holes that give the façade so much depth and relief. The largest prefabricated elements are the bathrooms, the technical room, the steel stairways and the folding façade screens that were transported in their entirety to the construction site and put in place and attached there.

Although the house was built with great attention to energysaving solutions, Loblolly House’s sustainability primarily lies in the efficiency achieved by total planning and the resulting far-reaching integration of construction, climate design and space-determining systems. All sorts of losses through cutting, emergency solutions and double work were avoided, to the benefit of an entirely controlled design and construction process. Even demolition was taken into account: if the house ever has to be torn down, all that will be left is the wooden piles sticking out of the ground, which as time goes by will be assimilated into the loblolly forest. 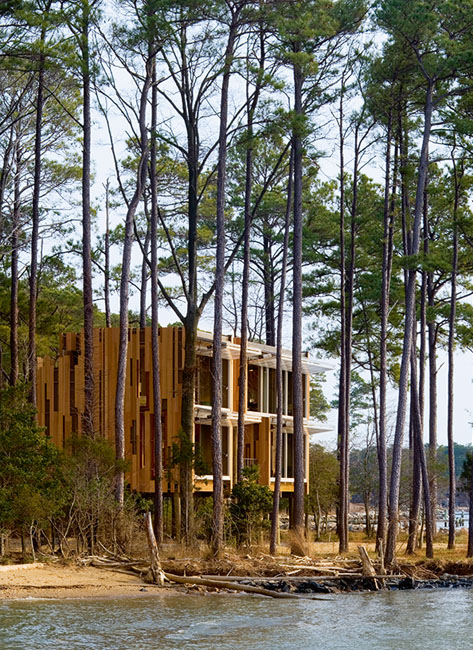