The idea that the development of twentieth-century modern architecture constitutes a linear and inevitable step in the evolution of the art of building has long since made way for a much more nuanced and layered perspective. The relationship between past and present is a complex one. Innovation can spring from a return to past practices, while clinging to an obsessive idea of the new can just as easily lead to stagnation. Looking back on the architecture of housing over the past 150 years, we can see a recurring orientation on forms from the past, albeit one that’s informed by changing motivations and with different outcomes.

Historians of nineteenth and twentieth century architecture tend to attribute a key role to the British Arts and Crafts movement, in which innovation and the past were inextricably linked. Arts and Crafts exponents wanted to break free from the straitjacket of the historicism of Victorian architecture and offer an alternative to industrial mass production. The movement sought freedom and functionality by exchanging a formal composition for a free, additive method, and mechanical reproduction for unique craftsmanship.

An important source of inspiration was the anonymous, traditional and seemingly timeless architecture of 300 years earlier, predating the industrial era. Richard Norman Shaw (1831-1912) drew on this source for a series of country house designs and developed a new free style that brought together all manner of influences. Later Arts and Crafts exponents interpreted the historic models in different ways. The work of Mackay Hugh Baillie Scott (1864-1945) follows its examples quite closely, at least in a formal sense. Aside from the familiar material and formal properties, he displayed a striking inventiveness in finding new typologies for the mass production of housing. Waterlow Court in Hampstead Garden Suburb in North London is a case in point. The building, one of the very first affordable apartment buildings with shared facilities for single occupants, looked like a sixteenth-century university college. The architect saw his design as a first step towards an entirely new way of living in a suburban setting, where collective housing blocks, for families as well as single people, provide an alternative to what he thought were dreary suburbs with endless terraced housing.

We find another interpretation of the sources put forward by the first generation of Arts and Crafts architects in the work of Baillie Scott’s contemporary Edwin Lutyens (1869-1944), who intensifies certain characteristics. Unexpected combinations of forms, contrasts between excessively magnified elements such as chimneys alongside minimal façade openings, meet in highly personal designs that sometimes verge on caricatures of the historic precedents. The closed and curved façade surfaces of Tigbourne Court, topped with colossal chimneys, lend a supremely dramatic touch to the entrance of the house, one of Lutyens’ many country house designs. 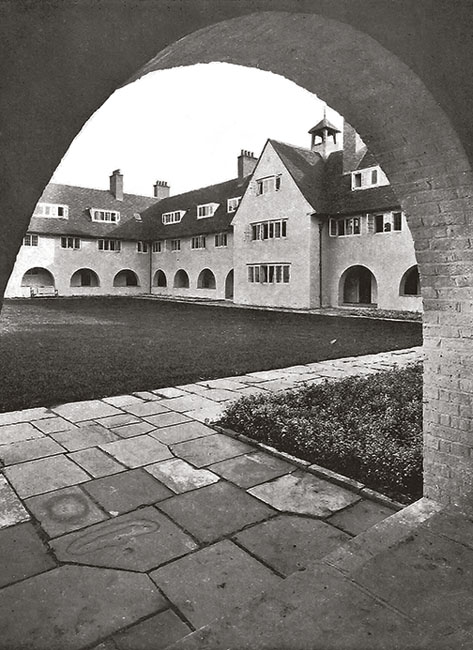