History and Memory in Architectural and Literary Practice

The topic of the Writingplace Journal’s second issue, Inscription: Tracing Place focuses on the role of history and memory in literary and architectural practices.

The interest in memory has branched out from the overlapping of the humanities and the neuro- and social sciences to include increasingly popular forms of writing and discourse such as personal memoirs and autobiographies. Recollection, confession and being a witness help us to reflect upon the meaning of both individual and collective memory and experience. Memory and its manifestations also touch very significantly and deeply on questions of identity, of nationalism, of power and authority – issues that nowadays fracture our public space as well as our social tissue.

The view that memory is factual is common. But it is also more or less common knowledge that it is or may be in part fictional, an invention in the sense that it is built upon subjective impressions, indirect and fragmented reminiscences and retellings. According to Edward W. Said, in ‘Invention, Memory and Place’: ‘To this whole matter of memory as a social, political, and historical enterprise has been added a complication . . . namely, the role of invention.’ However, even if invention assumes worrisome aspects when it comes to the utilitarian fictionalization of the past and the manipulation of the collective memory, the interplay between place, memory and invention is nevertheless the substance and condition for both literature and architecture.

The philosophical thinking on the topic of place tends to adopt a similar dual perspective. On one hand, place is thought of as an empirical idea, which has a reality independent and external to human experience. On the other hand, place is thought of as a constructive product of human perception, so that without human participation, place would lose its sense and definition. In Place and Experience, the Australian philosopher Jeff Malpas emphasized this co-dependence of memory, the temporal and the spatial, on place, which held both together. As such, intangible or disembodied memory, that is memory that is unplaced, is no memory at all. This idea goes all the way back to where the thinking about space and place began in Ancient Greece (at least in written form). When Plato, in his Timaeus, gave us a speculative reconstruction of the genesis of the world, he proposed a space of becoming, chora, a kind of tea-cup model of a storm, chora dissolved into a space of completion, topos. Topos is where the whirlwind of becoming settles into a philosophical equivalent of ‘and they lived happily ever after’. Aristotle took topos a step further, defining it as the receptacle of a thing without the thing itself, a kind of negative that could locate things in their proper order.

To understand this elusive idea, we might refer to the other meaning of topos, that of referring to the subject of a story or discourse. It is remarkable that, in the etymology of this word, both aspects of place manifest themselves as indissolubly linked: places can only form in things through stories entangled with them. For something to be somewhere we need a story to be able to tell about it. Similarly, all stories locate and situate themselves in a place. That is why placeless memory is such a contradictory concept. Our mind only holds half of a memory, the other half resides in the taste of the madeleine, in the building where we had coffee or in the street where he kissed her. Buildings and urban spaces become places in the stories that come to be attached to them.

The writings of W.G. Sebald merge, overlap and confound fact and fiction, invention and memory, by means of document, text and image, and the relations with the events of experience and the processes of narration. Such narrative devices produce both the possibilities of communal memory and allow us to relate to as well as empathize with, regardless of being factual or fictional In Austerlitz, the featured places, seen through the eyes of the protagonist on a journey through Europe, are described with the intensity of reviving memories.

Before him, Marcel Proust revealed the character of memory as deeply tied to space as to time, and the truthful possibility of a recovery of time and of self through place. Gaston Bachelard’s equally zealous explorations of intimate space in The Poetics of Space, an exploration that he himself defined as a form of ‘topophilia’, is also grounded in the concept of memory and its related phenomena. From these authors, the reader undergoes a sense of the remembered, and of the process of remembering, as experienced only in the dense materiality of places, spaces and things.

These and other evocative literary descriptions bring to light aspects of atmosphere, activities, memories, rituals and emotions related to place.

This issue of Writingplace seeks to investigate how literary evocations of memory can be or have been used in site analysis or architectural design. Like the tracing of history in lines and stones is depicted in the writings of contemporary authors, architects, urban planners and landscape architects, the question of local urban cultures, histories and stories may be explored with a literary lens. This approach offers the possibility to understand, not only how urban places are experienced and remembered, but also how they can be produced or transformed.

In particular, this issue contains articles that identify and explore trends, authors, key concepts and theories discussed across the disciplines, thereby engaging with, interrupting, and unsettling notions of place and space, history and story. It shows how place is re-imagined and re-experienced through different practices and disciplines, both materially and through memory; how cultural, political and economic histories and stories are experienced by and inscribed upon and through place and building; how theoretical and experiential uses of place expand and challenge perception, memory and storytelling.

In this issue of Writingplace, the authors look for traces of architectural memory in literary works as well as in particular cities such as Diu, Juiz de Fora, Glasgow, Ohrid, Nicosia and Bogotá. Within these contributions, we have observed three overlapping practices: reading, walking and responding.

Klaske Havik is associate professor of architecture, Methods & Analysis at Delft University of Technology. She studied architecture in Delft and Helsinki and literary writing in Amsterdam. She has developed a distinct research approach relating architectural and urban questions (such as the use, experience and imagination of place) to literary language. Her book Urban Literacy: Reading and Writing Architecture (2014), based on her PhD research, developed a literary approach to architecture. She initiated the platform Writingplace and organized the international conference Writingplace: Literary Methods in Architectural Research and Design in 2013. The book Writingplace: Investigations in Architecture and Literature appeared in 2016. Klaske Havik is editor of OASE, Journal for Architecture. Havik’s literary work has appeared in Dutch poetry collections and literary magazines.

Susana Oliveira teaches Design and Visual Communication at the Faculty of Architecture in Lisbon. She was one of the initiators and organizers, with Arch. Pedro Gadanho, of the first conference on architecture and fiction: Once Upon a Place: Haunted Houses and Imaginary Cities in Lisbon, 2010. (http://www.onceuponaplace.fa.utl.pt/). She edited the Once Upon a Place proceedings book (Lisbon: Caleidoscópio, 2013) as well as a book series where literary works are transcribed to architectural drawings and models. The first book, now in print, is a XVIII novel by Bastide, La Petite Maison, with drawings by Siza Vieira (Abysmo). She was a Visiting Scholar at GSAPP-Columbia University early 2014 for her Postdoctoral research on Architectural Imagination in Literature, funded by the Portuguese Science Foundation.

Jacob Voorthuis is associate Professor of Philosophy of Design in Architecture and Head of the School of Architecture and Urban Design and Engineering of the Department of the Built Environment, TU Eindhoven. In his educational activities and research at the Technical University of Eindhoven (TU/e) Jacob relies on his background in architectural theory and philosophy, dealing with the assessment of designs and design decisions. His department focuses particularly on the social-physical space: the relationship between humans and their environment. The aim is to train people to serve society with adequate knowledge, effective skills and a well-founded attitude by discussing and investigating the conditionality of these competencies relying on a scientific attitude. Jacob Voorthuis lectures in the philosophy of the built environment at TU/e. He graduated in Art History at Leiden University of Leiden in 1988, specialising in Art Theory and Aesthetics. In 1996 he defended his doctorate, which attempted to confront the subject of architectural design and its role in society with philosophical analysis. He has a special interest in the relationship between spatial practice and design, his research is concerned with the possibility of judging designs and design decisions from the perspective of a developing ontology of use, the attempt to remodel our conception of use and the useful in design thinking.

Sioli, Angeliki. "The Architecture of Walking; Embodied Perception in Novels of the European City in the 1920s." PhD diss., McGill University Libraries, 2015. 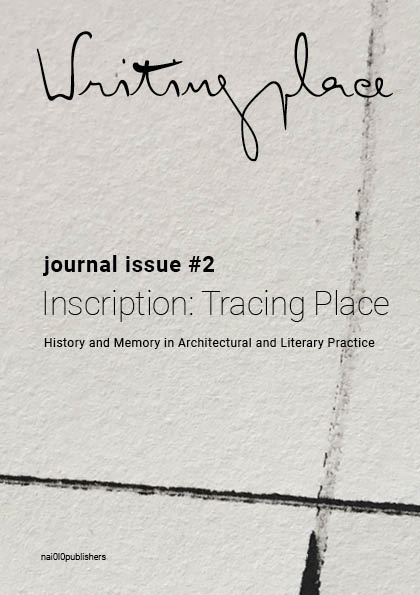